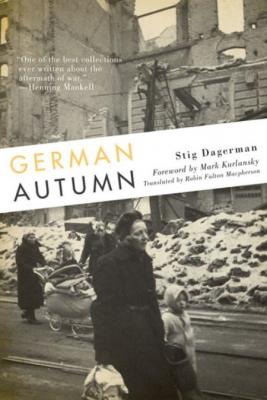 In late 1946, Stig Dagerman was assigned by the Swedish newspaper Expressen to report on life in Germany immediately after the fall of the Third Reich. First published in Sweden in 1947, German Autumn, a collection of the articles written for that assignment, was unlike any other reporting at the time. While most Allied and foreign journalists spun their writing on the widely held belief that the German people deserved their fate, Dagerman disagreed and reported on the humanness of the men and women ruined by the war—their guilt and suffering. Dagerman was already a prominent writer in Sweden, but the publication and broad reception of German Autumn throughout Europe established him as a compassionate journalist and led to the long-standing international influence of the book.

Presented here in its first American edition with a compelling new foreword by Mark Kurlansky, Dagerman’s essays on the tragic aftermath of war, suffering, and guilt are as hauntingly relevant today amid current global conflict as they were sixty years ago.

Stig Dagerman (1923–1954) was regarded as the most talented young writer of the Swedish postwar generation. By age twenty-six he had published four novels, a collection of short stories, and four full-length plays, in addition to German Autumn.

Robin Fulton Macpherson is a Scottish poet and translator who has lived and worked in Norway since 1973.

Mark Kurlansky is a New York Times best-selling author of many books, including Cod: A Biography of the Fish That Changed the World and Salt: A World History.

"Dagerman wrote with beautiful objectivity. Instead of emotive phrases, he uses a choice of facts, like bricks, to construct an emotion."—Graham Greene

"German Autumn is one of the best collections ever written about the aftermath of war. It is on par with John Reed’s classic articles from the Soviet Union as well as with Edgar Snow’s articles about the great political revolution in China. Stig Dagerman depicts the tragic realities of post–World War II Germany with astonishing clarity and artistic skillfulness. He provides the reader with a profound insight, which ultimately is the story of every war. To anyone interested in understanding what great journalism means, German Autumn is indispensable. It should be compulsory reading for all young people who might consider becoming a journalist, and it is as alive as it was when first published in 1947. Read it."—Henning Mankell

"German Autumn is a very important book and it is a very good thing that an English language version is becoming available for Americans. We need this book. "—Mark Kurlansky, from the Foreword