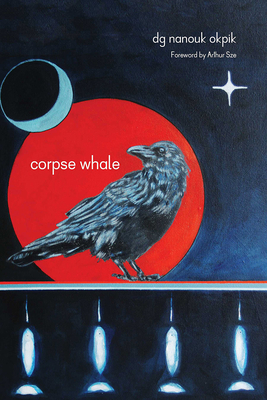 A self-proclaimed “vessel in which stories are told from time immemorial,” poet dg nanouk okpik seamlessly melds both traditional and contemporary narrative, setting her apart from her peers. The result is a collection of poems that are steeped in the perspective of an Inuit of the twenty-first century—a perspective that is fresh, vibrant, and rarely seen in contemporary poetics.

Fearless in her craft, okpik brings an experimental, yet poignant, hybrid aesthetic to her first book, making it truly one of a kind. “It takes all of us seeing, hearing, touching, tasting, and smelling to be one,” she says, embodying these words in her work. Every sense is amplified as the poems, carefully arranged, pull the reader into their worlds. While each poem stands on its own, they flow together throughout the collection into a single cohesive body.

The book quickly sets up its own rhythms, moving the reader through interior and exterior landscapes, dark and light, and other spaces both ecological and spiritual. These narrative, and often visionary, poems let the lives of animal species and the power of natural processes weave into the human psyche, and vice versa.

Okpik’s descriptive rhythms ground the reader in movement and music that transcend everyday logic and open up our hearts to the richness of meaning available in the interior and exterior worlds.

dg nanouk okpik is a resident advisor at Santa Fe Indian School in New Mexico. Her poetry appears in the books Effigies: An Anthology of New Indigenous Writing, and Sing: Poetry from the Indigenous Americas.

"Unlike poets who adopt cultures into which they weren't born, or raised, okpik, who has fished the waters of which she writes so eloquently, has something rare these days: an authentic voice, one that nets ancient beliefs without disgarding modern science or the daily news."—Poetica

“Corpse Whale is a refreshing departure from many of the tropes we see in contemporary poetry. It is an emotive illumination into a corner of the world we so rarely get a glimpse of. Intimate and storied, okpik’s work ushers us into a new poetic topography that is both imaginative and necessary.”—Matthew Shenoda, author of Seasons of Lotus, Seasons of Bone

“dg okpik’s remarkable prowess in literary composition, in curating silence and space, presents a vessel of breath ripe with a singing, resonant and clear. Suspended with an undercurrent, a waving future steeped in thawing history gleaned for immediacy, a presence, [okpik’s poetry] is incredibly impressive and mindfully engaging. This book is a wave of consciousness from an extraordinary human being bringing us home. Nothing like it before, now suddenly essential, like an earthquake uproots soapstone, a part of us was always here, and okpik insists we relax into it and feel this flow. Fall in, don’t look back. You need this. You do.”—Allison Adelle Hedge Coke, editor of Sing: Poetry from the Indigenous Americas

“How many new old worlds and times we inhabit in dg okpik’s poems! ‘Is this the way to the earth?’ she asks, inviting us to dive right through the icy depths with her, scanning, roaming. We learn that it is not just time but all worlds that are contemporaneous in the mind. Haunted by the past, present, and future in several forms and selves, we begin to understand the healing of these poems is to put time back into itself. In a multiplicity of presence the poet watches her other move through time, enacting these stories as the months turn and turn again, renewed and ancient in their language.”—Eleni Sikélianòs, author of Body Clock