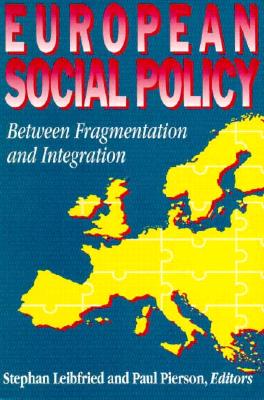 As the European Union grows and matures, its movement toward a single market has been the primary focus of attention. However, other policy areas have been greatly affected by the process of European integration. This volume deals with the development of social policy in the EU. The authors examine the substance of particular policies, such as industrial relations, immigration, agriculture, and gender equality. They emphasize the distinctive nature and dynamics of integrating policy in a ""multi-tiered"" system--one in which individual member states share policymaking responsibilities with central authorities. They also compare social policymaking in the EU with that in Canada and the United States, two other multi-tiered, or federal, systems.

" Stephan Leibfried is professor of social policy and social adminstration at Bremen University in Germany and coeditor of Poverty in the Modern Welfare State (Westdeutscher Verlag, 1993). Paul Pierson is associate professor o"