Interpreters of Occupation: Gender and the Politics of Belonging in an Iraqi Refugee Network (Paperback) 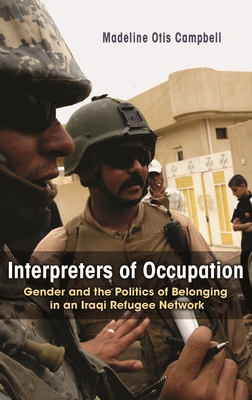 During the Iraq War, thousands of young Baghdadis worked as interpreters for US troops, becoming the front line of the so-called War on Terror. Deployed by the military as linguistic as well as cultural interpreters--translating the human terrain of Iraq--members of this network urgently honed identification strategies amid suspicion from US forces, fellow Iraqis, and, not least of all, one another. In Interpreters of Occupation, Campbell traces the experiences of twelve individuals from their young adulthood as members of the Ba'thist generation, to their work as interpreters, through their navigation of the US immigration pipeline, and finally to their resettlement in the United States. Throughout, Campbell considers how these men and women grappled with issues of belonging and betrayal, both on the battlefield in Iraq and in the US-based diaspora.
A nuanced and richly detailed ethnography, Interpreters of Occupation gives voice to a generation of US allies through their diverse and vividly rendered life histories. In the face of what some considered a national betrayal in Iraq and their experiences of otherness within the United States, interpreters negotiate what it means to belong to a diasporic community in flux.

Madeline Otis Campbell is assistant professor of urban studies and director of the Center for Human Rights at Worcester State University.