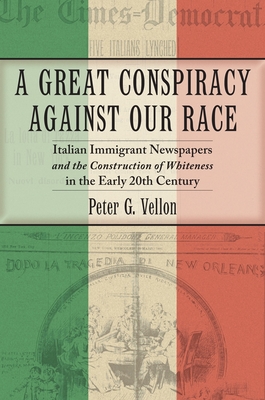 In A Great Conspiracy against Our Race, Peter Vellon explores how Italian immigrants, a once undesirable and "swarthy" race, assimilated into dominant white culture through the influential national and radical Italian language press in New York City.

Racial history has always been the thorn in America's side, with a swath of injustices--slavery, lynching, segregation, and many other ills--perpetrated against black people. This very history is complicated by, and also dependent on, what constitutes a white person in this country. Many of the European immigrant groups now considered white also had to struggle with their own racial identities.

Examining the press as a cultural production of the Italian immigrant community, this book investigates how this immigrant press constructed race, class, and identity from 1886 through 1920. Their frequent coverage of racially charged events of the time, as well as other topics such as capitalism and religion, reveals how these papers constructed a racial identity as Italian, American, and white.

A Great Conspiracy against Our Race vividly illustrates how the immigrant press was a site where socially constructed categories of race, color, civilization, and identity were reworked, created, contested, and negotiated. Vellon also uncovers how Italian immigrants filtered societal pressures and redefined the parameters of whiteness, constructing their own identity. This work is an important contribution to not only Italian American history, but America's history of immigration and race.