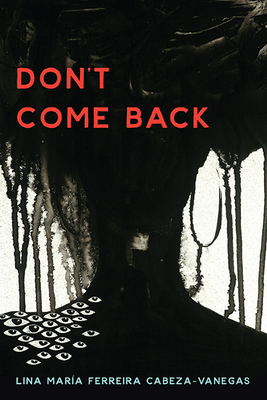 By Lina María Ferreira Cabeza-Vanegas
$22.95
On Our Shelves

In this collection of linked lyrical and narrative essays, experimental translations, and reinterpreted myths, Lina Maria Ferreira Cabeza-Vanegas launches into an exploration of home and identity, family history and belonging, continually examining what it means to feel familiarity but never really feel at home.

Don’t Come Back intermixes translations of Spanish adages and adaptations of major Colombian myths with personal essays about growing up amidst violence, magic, and an unyielding Andean sun. Home is place and time and people and language and history, and none of these are ever set in stone. Attempting to reconcile the irreconcilable and translate the untranslatable—to move smoothly and cohesively between culture, language, and place—Ferreira Cabeza-Vanegas is torn between spaces, between the aunt who begs her to return to Colombia and the mother who tells her, “There’s nothing here for you, Lina. Don’t come back.” Don’t Come Back is an exploration of home and identity that constantly asks, “If you really could go back, would you?”

Lina María Ferreira Cabeza-Vanegas is the winner of the 2016 Rona Jaffe Foundation Writers’ Award, author of Drown/Sever/Sing, and Visiting Assistant Professor at The Ohio State University.

“In Don’t Come Back, Lina María Ferreira Cabeza-Vanegas chronicles the immigrant’s ever-present tug of family and the familiar—what is left behind—and the equally strong pull of the new land with its lure of stability and security. Told in a lyrical and well-crafted style, Lina’s story asks readers to venture into the migrant heart’s dilemma—to go back or to stay in the new country.”  —Norma E. Cantú

“Lina Ferreira is a shape-shifter of an essayist, never predictable. The worlds she inhabits are as big as legend and as small as a family in Colombia navigating the large and small cruelties of life. To try to define this book would be to kill it—the essays leap over formal boundaries in prose (by turns, moving, hilarious, and brutal) that can only ignite and inspire the imagination and intellect of the sympathetic reader.” —Robin Hemley, author of Nola: Memoir of Faith, Art, and Madness

“Don't Come Back is a gathering of images, memories, history, and myths that encircle the present in an attempt to make sense of a fragmented inheritance. Only Ferreira could make a dying cat, a torn and hanging lip, or a dissected lover beautiful. This book wounds and soothes in turn, disturbs and seduces at once.” —Angela Pelster-Wiebe, author of Limber (winner of the GLCA New Writers Award in Nonfiction)

“An extraordinary, shockingly good collection from a brilliant young writer, it perfectly fuses the carnal and the spectral, tenderness and unflinching grit, wry humor and recovered sorrow. This book exemplifies the role of imagination in nonfiction. Lina Ferreira’s sophisticated prose will surprise, delight, disconcert, entertain, dazzle, and move you.” —Phillip Lopate