Romanticism’s Other Minds: Poetry, Cognition, and the Science of Sociability (Cognitive Approaches to Culture) (Hardcover) 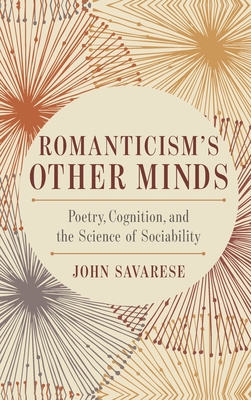 In Romanticism’s Other Minds: Poetry, Cognition, and the Science of Sociability, John Savarese reassesses early relationships between Romantic poetry and the sciences, uncovering a prehistory of cognitive approaches to literature and demonstrating earlier engagement of cognitive approaches than has heretofore been examined at length. Eighteenth- and early nineteenth-century writers framed poetry as a window into the mind’s original, underlying structures of thought and feeling. While that Romantic argument helped forge a well-known relationship between poetry and introspective or private consciousness, Savarese argues that it also made poetry the staging ground for a more surprising set of debates about the naturally social mind. From James Macpherson’s forgeries of ancient Scottish poetry to Wordsworth’s and Coleridge’s Lyrical Ballads, poets mined traditional literatures and recent scientific conjectures to produce alternate histories of cognition, histories that variously emphasized the impersonal, the intersubjective, and the collective. By bringing together poetics, philosophy of mind, and the physiology of embodied experience—and with major studies of James Macpherson, Anna Letitia Barbauld, William Wordsworth, and Walter Scott—Romanticism’s Other Minds recovers the interdisciplinary conversations at the heart of Romantic-era literary theory.

John Savarese is Assistant Professor at the University of Waterloo.

“Romanticism’s Other Minds makes a highly original contribution, adding something genuinely new to the discussion of poetry and cognition.” —Alan Richardson, author of The Neural Sublime: Cognitive Theories and Romantic Texts

“John Savarese shows how writers wanted to think of the inner mind as also a social mind, and thus the implications of Savarese’s work for thinking about Romantic politics are enormous” —Mark Canuel, author of Justice, Dissent, and the Sublime