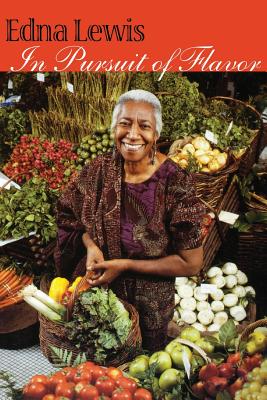 By Edna Lewis
$35.00
In Stock at Publisher - Available to Ship to Your Home

Perhaps no other cook has played such a central role in the renaissance of traditional southern cooking as Edna Lewis. When asked who has influenced them most, chefs from New York to Little Washington to Charleston cite Ms. Lewis and her classic collection of recipes, In Pursuit of Flavor, first published in 1988.

Edna Lewis learned to cook by watching her mother prepare food in their kitchen in a small farming community in Virginia. Because she was raised at a time when the vegetables came from the garden, fruit from the orchard, pickles, relishes, chutney, and jellies from quick canning, and meat from the smokehouse, Edna Lewis knows how food should taste. Every recipe included in her cookbook, both old friends and new discoveries, reflects her memory of and continuing search for good flavor.

In chapters devoted to fruits and vegetables, meat and fowl, fish, herbs and spices, bread, and other baked goods, Ms. Lewis shares her secrets for getting the best out of food: combining tomatoes with cymling squash, pumpkins with onion and bacon, cooking sweet potatoes with lemon, and boiling corn in its husk. She always keeps a bit of country ham around to perk up greens, cooks fish fillets or chicken breasts in parchment, and braises meat in a clay pot to keep it moist. Her baking recipes, for the griddle and the oven, include tips on the right flour to use, how to make your own baking powder (to avoid the chemical taste), how to listen for signs that a cake is done, and when to use frozen butter in a pie crust and when to use pure leaf lard.

In Pursuit of Flavor brings generations of cooking wisdom to today's kitchen.

Edna Lewis was born in Freetown, Orange County, Virginia, in a community founded by her grandfather and his friends shortly after their emancipation from slavery. She is the author of The Taste of Country Cooking.