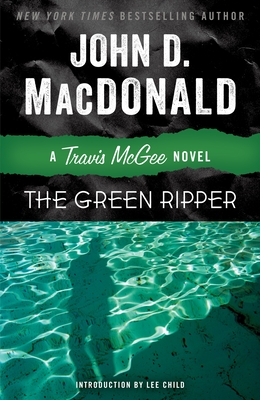 This is book number 18 in the Travis McGee series.

From a beloved master of crime fiction, The Green Ripper is one of many classic novels featuring Travis McGee, the hard-boiled detective who lives on a houseboat.

Travis McGee has known his share of beautiful girls, but true love always passed him by—until Gretel. Life aboard the Busted Flush has never been so sweet. But suddenly, Gretel dies of an unidentified illness—or so he’s told. Convinced that the woman who stole his heart has been murdered, McGee finds himself pursuing a less-than-noble cause: revenge.

McGee has lost not only the love of his life but also his last hope for stability. Soon grief turns to blinding rage. So when he finds the people responsible for Gretel’s death, McGee goes off the rails—and off the grid, three thousand miles from home.

McGee emerges in the California woods as Tom McGraw, a fisherman looking for his long-lost daughter. This mysterious newcomer starts knocking off targets one by one. But as he pursues his single-minded crusade for justice, he becomes more and more unhinged. McGee has spent his life saving other people, but now he’ll need to find the strength to save himself—before he loses his mind.