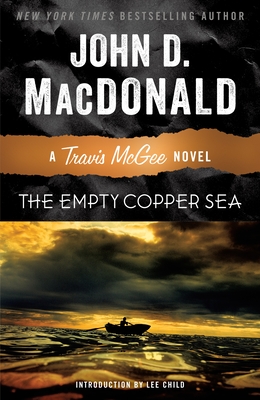 This is book number 17 in the Travis McGee series.

From a beloved master of crime fiction, The Empty Copper Sea is one of many classic novels featuring Travis McGee, the hard-boiled detective who lives on a houseboat.

Asking for help is something a proud man like Van Harder would never do. So when he shows up at the Busted Flush, Travis McGee knows that he must be the man’s last resort. What Harder wants salvaged is his reputation. After a long career as a seaman, he was piloting a boat the night his employer fell overboard. Harder is certain he’s been set up, but to help him, McGee must prove that a dead man is actually alive.

“John D. MacDonald is a shining example for all us in the field. Talk about the best.”—Mary Higgins Clark

The fateful ride started with Harder at the helm of Hubbard Lawless’s luxury cruiser. It ends with him coming to, fuzzy and disoriented, and Hub lost to the water. Now everyone is saying that Harder got drunk, passed out, and is negligent in his boss’s death. The thing is, Van’s not a drinker . . . at least, not anymore.

Who would want to frame the good captain, and to what end? Dead or alive, Lawless is worth a lot of money. People are always eager to get a piece of that action—including some, as McGee soon finds, who are willing to take a piece out of anyone who gets in their way.