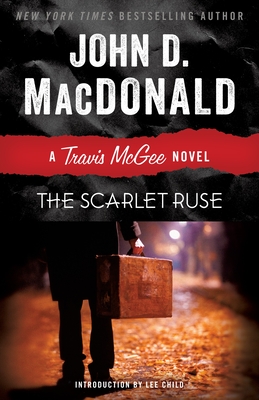 This is book number 14 in the Travis McGee series.

From a beloved master of crime fiction, The Scarlet Ruse is one of many classic novels featuring Travis McGee, the hard-boiled detective who lives on a houseboat.

Travis McGee’s getting lazy. Drinking Boodles on the Busted Flush has become a full-time job. But when he hears that six figures’ worth of rare stamps have wandered off, McGee finds himself back in the salvage business. To deliver on this case, McGee will have to be suspicious of everyone he meets—because what he’s looking for is property of the mob.

“The Travis McGee novels are among the finest works of fiction ever penned by an American author.”—Jonathan Kellerman

Hirsh Fedderman has misplaced an extremely valuable commodity: the stamp collection of mobster Frank Sprenger. Assessed at around four hundred thousand dollars, these are no ordinary stamps, and Sprenger’s no ordinary collector: He’s liable to break some fingers if he doesn’t get what he’s owed.

Lucky for Hirsh, he’s got a friend in Travis McGee. Soon McGee is hot on the trail of the missing collection—not to mention hot for a voluptuous stamp expert by the name of Mary Alice. Only it’s not McGee’s heart that’s in danger. He soon realizes that he’s run afoul of a vicious syndicate, and neither rain, nor sleet, nor gloom of night will keep them from collecting McGee’s head.