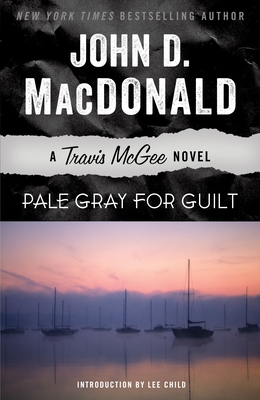 This is book number 9 in the Travis McGee series.

From a beloved master of crime fiction, Pale Gray for Guilt is one of many classic novels featuring Travis McGee, the hard-boiled detective who lives on a houseboat.

Travis McGee’s old football buddy Tush Bannon is resisting pressure to sell off his floundering motel and marina to a group of influential movers and shakers. Then he’s found dead. For a big man, Tush was a pussycat: devoted to his wife and three kids and always optimistic about his business—even when things were at their worst. So even though his death is ruled a suicide, McGee suspects murder . . . and a vile conspiracy.

“As a young writer, all I ever wanted was to touch readers as powerfully as John D. MacDonald touched me.”—Dean Koontz

Tush Bannon was in the wrong spot at the wrong time. His measly plot of land just so happened to sit right in the middle of a rich parcel of five hundred riverfront acres that big-money real estate interests decided they simply must have.

It didn’t matter that Tush was a nice guy with a family, or that he never knew he was dealing with a criminal element. They squashed him like a bug and walked away, counting their change. But one thing they never counted on: the gentle giant had a not-so-gentle friend in Travis McGee. And now he’s going to make them pay.