A Purple Place for Dying: A Travis McGee Novel (Paperback) 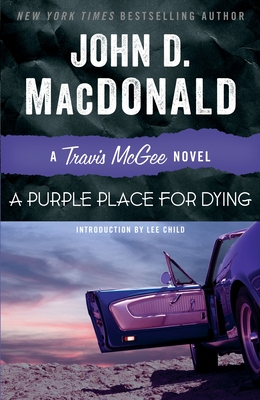 This is book number 2 in the Travis McGee series.

From a beloved master of crime fiction, A Purple Place for Dying is one of many classic novels featuring Travis McGee, the hard-boiled detective who lives on a houseboat.

Travis McGee’s taking his retirement in installments while he’s still young enough to enjoy it. But sooner or later, his money runs out and he has to work. This time McGee’s lured out West to a strangely secretive meeting with a woman in trouble, in a place whose beauty hides some ugly, dangerous secrets.

“John D. MacDonald created a staggering quantity of wonderful books, each rich with characterization, suspense, and an almost intoxicating sense of place.”—Jonathan Kellerman

Mona is in love with a poor, young college professor and married to a wealthy man whom she is convinced is stealing from her trust fund. So she does what any self-respecting girl would do: She hires someone to steal her money back so she can run away with the love of her life.

Travis isn’t sure he wants to help out until he sees Mona getting shot and killed out on the cliffs near her cabin. Now he’s a lead suspect in a plot to help her escape, and to clear his name, he needs to get to the bottom of things. But the murders just keep mounting, and for Travis, even working with Mona’s husband doesn’t seem to help matters. Will he be able to uncover the complex plot in time to save his own skin?