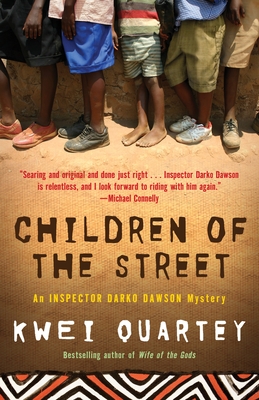 This is book number 2 in the A Darko Dawson Mystery series.

In the slums of Accra, Ghana’s fast-moving, cosmopolitan capital, teenagers are turning up dead. Inspector Darko Dawson has seen many crimes, but this latest string of murders—in which all the young victims bear a chilling signature—is the most unsettling of his career. Are these heinous acts a form of ritual killing or the work of a lone, cold-blooded monster? With time running out, Dawson embarks on a harrowing journey through the city’s underbelly and confronts the brutal world of the urban poor, where street children are forced to fight for their very survival—and a cunning killer seems just out of reach.

Kwei Quartey was raised in Ghana by an African American mother and a Ghanaian father, both of whom were university lecturers. Dr. Quartey practices medicine in Southern California, rising early in the morning to write before going to work.

“Quartey cleverly hides the culprit, but the whodunit's strength is as much in the depiction of a world largely unfamiliar to an American readership as in its playing fair.”--Publishers Weekly Starred Review

“Kwei Quartey does what all the best storytellers do. He takes you to a world you have never seen and makes it as real to you as your own backyard. In Children of the Street he brings a story that is searing and original and done just right. Inspector Darko Dawson is relentless and I look forward to riding with him again.”—Michael Connelly

Praise for Kwei Quartey’s Wife of the Gods

“Fans of The No. 1 Ladies’ Detective Agency may have a new hero: Detective Inspector Darko Dawson.”—The Wall Street Journal