Weasels in the Attic (Paperback) 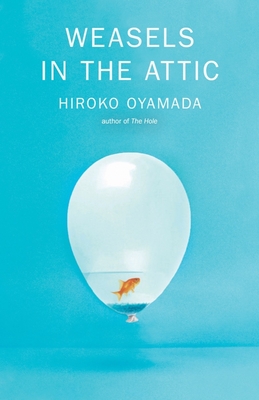 From the acclaimed author of The Hole and The Factory, a thrilling and mysterious novel that explores fertility, masculinity, and marriage in contemporary Japan

In three interconnected scenes, Hiroko Oyamada revisits the same set of characters at different junctures in their lives. In the back room of a pet store full of rare and exotic fish, old friends discuss dried shrimp and a strange new relationship. A couple who recently moved into a rustic home in the mountains discovers an unsettling solution to their weasel infestation. And a dinner party during a blizzard leads to a night in a room filled with aquariums and unpleasant dreams. Like Oyamada’s previous novels, Weasels in the Attic sets its sights on the overlooked aspects of contemporary Japanese society, and does so with a surreal sensibility that is entirely her own.

Born in Hiroshima in 1983, Hiroko Oyamada won the Shincho Prize for New Writers for The Factory, which was drawn from her experiences working as a temp for an automaker’s subsidiary. Her novel The Hole won Akutagawa Prize.

David Boyd is Assistant Professor of Japanese at the University of North Carolina at Charlotte. He has translated stories by Genichiro Takahashi, Masatsugu Ono and Toh EnJoe, among others. His translation of Hideo Furukawa’s Slow Boat won the 2017/2018 Japan-U.S. Friendship Commission (JUSFC) Prize for the Translation of Japanese Literature. With Sam Bett, he is cotranslating the novels of Mieko Kawakami.

Nothing feels fixed; everything in the book might be a hallucination.

Horrific and scary, while at the same time affirming and beautiful.
— New Republic

The acclaimed author of The Factory and The Hole returns with this new installment that might be her strongest, most memorable work yet. Just like the last two titles, Weasels in the Attic is a thin book totaling less than 100 pages...The book simmers with eerie tension and bursts with unforgettable monologues

As in Oyamada’s earlier novels, Weasels in the Attic lingers on the grotesqueries of everyday life with a subtle, deadpan humour.

The specter of snow melting, thus freeing the narrator and his wife from the mountain home in which they’re stranded, unspools deliciously backward in this consistently surprising story from one of the brightest writers in Japan. The narrative approach surfaces both clues and questions as a spring thaw does lost items.
— J. Howard Rosier - Vulture

Weasels in the Attic, the most recent of Oyamada’s works to be translated by Boyd, released in English earlier this month, teems with tropical fish and the eponymous weasels, whose lives and deaths reveal the precariousness of parenthood and family.