The Teeth of the Comb & Other Stories (Paperback) 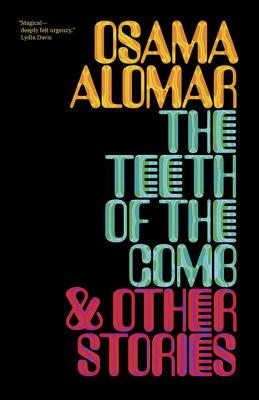 Personified animals (snakes, wolves, sheep), natural things (a swamp, a lake, a rainbow, trees), mankind’s creations (trucks, swords, zeroes) are all characters in The Teeth of the Comb. They aspire, they plot, they hope, they destroy, they fail, they love. These wonderful small stories animate new realities and make us see our reality anew. Reading Alomar’s sly moral fables and sharp political allegories, the reader always sits up a little straighter, and a little wiser. Here is the title story:

Some of the teeth of the comb were envious of the class differences that exist between humans. They strived desperately to increase their height, and, when they succeeded, began to look with disdain on their colleagues below.

After a little while the comb’s owner felt a desire to comb his hair. But when he found the comb in this state he threw it in the garbage.

Osama Alomar was born in Damascus, Syria in 1968 and now lives in Chicago. A poet, short-story writer, and musician, Alomar is the author of three collections of short stories and a volume of poetry. He is a regular contributor to various newspapers and journals within the Arab world.

C. J. Collins is a librarian and a translator based in Queens, NY.

Elegant, often elegiac sketches by Syrian-born writer Alomar, now a resident of Chicago.“He was born with a silver knife in his mouth. And he was its first victim.” Thus, in its entirety, one of Alomar’s short stories, this one with the simple title “The Knife.” Others stretch out to a page, a few others a little more than that, but all are masterpieces of compression, presented with the generally unironic matter-of-factness of a fable that, no matter how improbable the circumstances, behaves perfectly well according to its own logic: that knife could be literal just as easily as metaphorical, considering the violence and mayhem of the world. The title story is a sly allegory about the human desire for—well, for better circumstances than most of us enjoy, anyway, the teeth of the comb standing for aspirations that, even when fulfilled, do not go unpunished. Occasionally Alomar goes full-tilt for the classical fable, letting animals and sometimes even plants stand in for human beings; when humans and the natural world meet, it is seldom to our credit, as when an ear of wheat beholds a throng of human ears on heads that “were bent before their tyrant leader” and mistakes their posture for a boon. No good deed goes unpunished, indeed; in one fable worthy of Kafka, a writer is made to sit on his pen in torture, and his blood turns blue in the bargain. “He became prominent...and slowly came to his senses,” Alomar writes, leaving us to guess whether the writer became complicit in the regime that afflicted him or came to his senses in some other way, pleasant or horrific.Swamps and streams, lightning and dogs all play a part in these beguiling, suggestive fables. The stories are of perfect length, but one wishes the book went on for much longer.
— Kirkus (starred review)

Alomar's work speaks to the power that
words can have when they’re constrained, be it by style or by
necessity... a master of the form.
— Bradley Babendir - New Republic

There are no wasted words in Alomar’s beautiful collection of very short fictions. Philosophical and subversive, these tiny parables deconstruct human failings with a keen insight. The title story, an anecdote about the uneven teeth of a comb, reveals a cautionary tale about the pitfalls of social stratification. “Love Letter” tells the story of a couple separated by class, culture, and distance both metaphorical and physical. The nameless narrator emigrates during an era of oppression, mirroring Alomar’s exile from Syria. The lovers continue a written correspondence, but, as revolution and civil war divide their homeland, chaos threatens to sever the pair forever. In “The Shining Idea,” a cynical father debates with his optimistic son about the inherent darkness of humanity. “The world is a blank page,” the boy explains. The collection delves into universal themes of aging—“Journey of Life”—and love and loss. These stories deliver the kind of stunning maxims that a cunning master might spout to an eagerly waiting acolyte. By working together with C.J. Collins on the translation, the author succeeds in highlighting the inherent poetics of his prose....Alomar’s work swims in the aspects of the modern world that do not make sense upon closer inspection, like the correlations between poverty and capitalism. These brief narratives are not nihilistic; they convey a plea for progress and improvement. Alomar’s writing brims with hope, and this slim volume is full of compassion and depth.
— Publishers Weekly (starred review)

In the Arab world, the Syrian writer Osama Alomar has a growing reputation as the author of short, clever parables that comment obliquely on political and social issues. But here in Chicago, where he has lived in exile since 2008, he spends most of his time as the driver of Car 45 at the Horizon Taxi Cab company.
— Larry Rohter - The New York Times

In Alomar’s stories, fantasy never devolves into mere whimsy. His magical imaginative creations are, every one, inspired by his deeply felt philosophical, moral, and political convictions, giving these tales a heartfelt urgency.
— Lydia Davis - The New Yorker

Despite their apparent playful wit, Alomar’s deceptively slight short
stories have teeth and bite. In spare, accessible prose, one encounters
the painful and bitter poetry of exile running like a blood-red thread
through this slim but dense collection.
— Yahia Lababidi - World Literature Today