The Day of the Locust (Paperback) 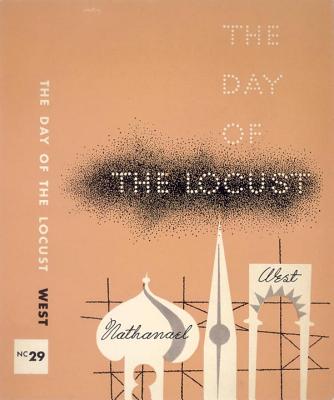 Follow art student-turned-Hollywood set designer Tod Hackett and nervous wreck Homer Simpson (you heard me) as they vie for the affections of wannabe starlet Faye Greener in this tragicomic novella of fame-seekers, hangers-on, gawkers, washouts, and bums. Featuring an unforgettable cast of characters, all of whom become figures in Tod's apocalyptic drawing, The Burning of Los Angeles. Very possibly my favorite book of all time.

Admired by F. Scott Fitzgerald, Dorothy Parker, and Dashiell Hammett, and hailed as one of the “Best 100 English-language novels” by Time magazine, The Day of the Locust continues to influence American writers, artists, and culture. Bob Dylan wrote the classic song “Day of the Locusts” in homage and Matt Groening’s Homer Simpson is named after one of its characters. No novel more perfectly captures the nuttier side of Hollywood. Here the lens is turned on its fringes — actors out of work, film extras with big dreams, and parents lining their children up for small roles. But it’s the bit actress Faye Greener who steals the spotlight with her wildly convoluted dreams of stardom: “I’m going to be a star some day—if I’m not I’ll commit suicide.”

In 1940, when an automobile accident prematurely claimed Nathanael West's life, he was a relatively obscure writer, the author of only four short novels. West's reputation has grown considerably since then and he is now considered one of the 20th century's major authors. Born in New York, West worked as the night manager of the Kenmore Hotel on East 23rd Street in Manhattan, as a contract scriptwriter for Columbia Pictures in Hollywood, and as a screenwriter for RKO Radio Picture.

Los Angeles has been the subject of, and setting for, many fine novels yet The Day of the Locust still feels like the single best-achieved piece of fiction the city has inspired.

West's Day of the Locust, a sun-blazed Polaroid of its time, seems permanently oracular.

Nathanael West's humor is of course not at the expense of the victim. It is a horselaugh at a world that is too ugly and bitter to be dealt with in any other way.
— The New York Times