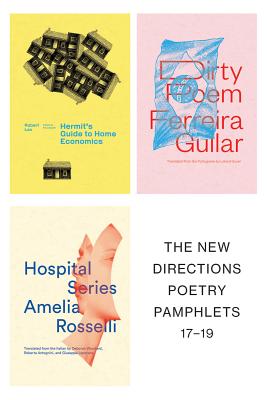 A three-pack of our Spring 2015 Poetry Pamphlets, featuring:

A Hermit's Guide to Home Economics, by Robert Lax

Robert Lax (1915–2000) was born in Olean, New York. At Columbia University he studied with Mark Van Doren and there began friendships with his classmates Thomas Merton and the painter Ad Reinhardt. He then worked as a university lecturer, film critic, script writer, and editor at the New Yorker. In 1962 he moved to the Greek islands, where he spent most of the last four decades of his life.

Poet, artist, art critic, essayist, dramatist, journalist, and scriptwriter, Ferreira Gullar (b. 1930), is the central figure of the Neo-Concretes and best known for his work Poema Sujo (Dirty Poem). He currently lives and writes in Rio de Janeiro.

The daughter of a martyred antifascist philosopher, Amelia Rosselli was born in Paris in 1930, grew up in England and New York, settling in Italy, first in Florence and then in Rome, only after the war. In 1996, she took her own life. A trilingual writer who described herself as “a poet of exploration,” Rosselli was also a translator (Emily Dickinson among others), musician, and musicologist, and the author of eight collections of poetry.

Paul J. Spaeth has edited and wrote about Robert Lax for many years, having founded the Lax Archives at St. Bonaventure University, where he is the Director of the Library, Special Collections Librarian, and also teaches.

Leland Guyer is the translator of many Brazilian writers of poetry, fiction and non-fiction, and is Professor of Spanish and Portuguese at Macalester College, St. Paul, Minnesota.

DEBORAH WOODARD is a poet and translator living in Seattle.

Giuseppe Leporace is a senior lecturer of Italian at the University of Washington.