That Smell and Notes from Prison (Paperback) 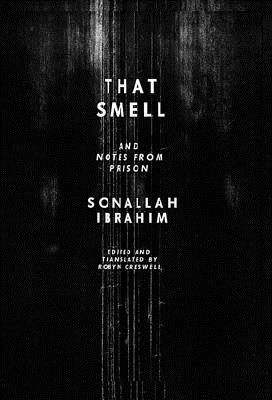 That Smell is Sonallah Ibrahim’s modernist masterpiece and one of the most influential Arabic novels. Composed in the wake of a five-year prison sentence, the semi-autobiographical story follows a recently released political prisoner as he wanders through Cairo, adrift in his native city.

That Smell is Sonallah Ibrahim’s modernist masterpiece and one of the most influential novels written in Arabic since WWII. Composed after a five-year term in prison, the semi-autobiographical story follows a recently released political prisoner as he wanders through Cairo, adrift in his native city. Living under house arrest, he tries to write of his tortuous experience, but instead smokes, spies on the neighbors, visits old lovers, and marvels at Egypt’s new consumer culture. Published in 1966, That Smell was immediately banned and the print-run confiscated. The original, uncensored version did not appear in Egypt for another twenty years.

For this edition, translator Robyn Creswell has also included an annotated selection of the author’s Notes from Prison, Ibrahim’s prison diaries—a personal archive comprising hundreds of handwritten notes copied onto Bafra-brand cigarette papers and smuggled out of jail. These stark, intense writings shed unexpected light on the sources and motives of Ibrahim’s groundbreaking novel. Also included in this edition is Ibrahim’s celebrated essay about the writing and reception of That Smell.

Born in Cairo in 1937, Sonallah Ibrahim studied law at Cairo University and was imprisoned in 1959 for his political activities. After his release he spent several years abroad and returned in 1974 to Cairo, where he has lived ever since. In 2004 he was awarded — and pointedly declined — the Egyptian government’s prestigious Novelist of the Year prize.

A critic, translator, and scholar, Robyn Creswell is currently the poetry editor for the Paris Review and assistant professor of comparative literature at Yale.

One of the Arab world's most distinguished novelist... an intellectual who thoroughly understands the price and value of freedom.
— Sarnia Mehrez - Al-Ahram

Since the 1960s, Sonallah Ibrahim has been Egypt's literary voice of political conscience.
— Jadaliyya

That Smell is not just a story, it is a revolution, the beginning of which is the artist's rebellion against himself.

That Smell marks a significant entry into the diminutive collection of Arabic literature translated into English, providing a dramatic new view of literature to American readers who otherwise see hardly any of it.

The pervasive moral
corruption of Nasser’s Egypt seeps up between the lines of Ibrahim’s seemingly
affectless prose. A landmark in Egyptian literature.
— J. M. Coetzee

Robyn Creswell has knocked it out of the park with his translation of Sonallah Ibrahim’s modern Egyptian classic.
— Lorin Stein - The Paris Review Daily

To this day, That Smell is a modernist masterpiece, a peerless provocation and a lodestar in the history of Arabic literature.