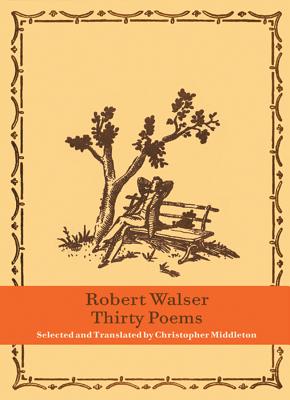 A deluxe edition of the Swiss master’s best poems.

In a small, exquisite clothbound format resembling the early Swiss and German editions of Walser’s work, Thirty Poems collects famed translator Christopher Middleton’s favorite poems from the more than five hundred Walser wrote. The illustrations range from an early poem in perfect copperplate handwriting, to one from a 1927 Czech-German newspaper, to a microscript.

Robert Walser (1878–1956) was born in Switzerland. He left school at fourteen and led a wandering and precarious existence working as a bank clerk, a butler in a castle, and an inventor's assistant while producing essays, stories, and novels. In 1933 he abandoned writing and entered a sanatorium—where he remained for the rest of his life. "I am not here to write," Walser said, "but to be mad."

Distinguished poet and translator Christopher Middleton lives in Austin, Texas. His awards include the Geoffrey Faber Memorial Prize and the Schegel-Tieck Translation Prize.

The magnificently humble. The enormously small. The meaningfully ridiculous. Robert Walser’s work often reads like a dazzling answer to the question, How immense can modesty be? If Emily Dickinson made cathedrals out of em dashes and capital letters and the angle of winter light, Walser accomplished the feat with, well, ladies’ feet and trousers and little emotive words like joy, uncapitalized…the two worked out in hoarded words a kindred kind of literature.
— Rivka Galchen - Harper's Magazine

The single most underrated writer of the 20th Century.
— The Los Angeles Times

The poems also give us Walser's manner in concentrated miniature, and it could be that rhyme - joining the disparate, cultivating the arbitrary - is at the heart of what he is doing. They are odd, whimsical, insouciant things, exhilarating in their ability to be what they are.
— The Times Literary Supplement