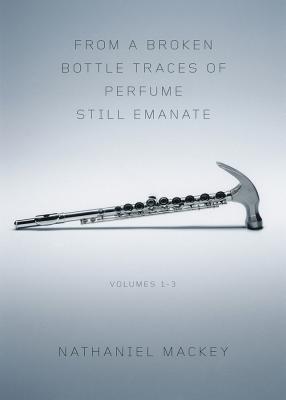 From a Broken Bottle Traces of Perfume Still Emanate: Volumes 1-3 collects the first three installments—Bedouin Hornbook, Djbot Baghostus’s Run, and Atet A.D.—of Nathaniel Mackey’s genre-defying work of fiction. A project that began over thirty years ago, From a Broken Bottle is an epistolary novel that unfolds through N.’s intricate letters to the mysterious Angel of Dust. Unexpected, profound happenings take place as N. delves into music and art and the goings-on of his transmorphic Los Angeles-based jazz ensemble, in which he is a composer and instrumentalist. This triple-set book opens in July 1978 with a dream of a haunting Archie Shepp solo, and closes in September 1982 in a parallactic studio recording session on a glass-bottomed boat borne aloft by the music. The fourth volume of Mackey’s novel, Bass Cathedral—also available from New Directions—was chosen by The New York Times as one of 100 Notable Books of 2008. But that it didn’t end there…

Nathaniel Mackey was born in Miami, Florida in 1947. He is the author of several books of poetry, fiction, and criticism, and has received many awards for his work, including the National Book Award in poetry for Splay Anthem, the Stephen Henderson Award from the African American Literature and Culture Society, and the Bollingen Prize from the Beinecke Library at Yale University. Mackey is the Reynolds Price Professor of English at Duke University, and edits the literary journal Hambone.

In Nathaniel Mackey’s world, everything from a guitar strum to a needle scratch becomes an open-ended exegesis of musical meaning that is equal parts African American history, Bedouin mysticism, and Mackey’s own imagination. Though this world resembles the everyday world most of us live in, the normal constraints don’t hold Mackey or his characters down…. You aren’t likely to forget it.
— Travis Nichols - The Believer

Mackey’s characters are musicians for whom there is no outside of music, for whom improvisation and performance are ways of being, forms of consciousness, and tools of Africa-and-beyond cultural survival.
— Josh Kun - The Boston Phoenix