An Episode in the Life of a Landscape Painter (Paperback) 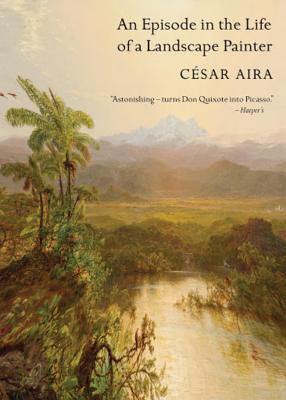 A favorite of Patti Smith, and a Werner Herzog movie just waiting to happen, this novella by the bonkers and prolific Aira (his best I think) recounts the misadventures of an Austrian painter who believes a sojourn to the Pampas of Argentina will help him perfect his radical new technique, only to discover – in a phrase coined by my friend after reading – that sometimes the landscape paints you.

An astounding novel from Argentina that is a meditation on the beautiful and the grotesque in nature, the art of landscape painting, and one experience in a man's life that became a lightning rod for inspiration.

An Episode in the Life of a Landscape Painter is the story of a moment in the life of the German artist Johan Moritz Rugendas (1802-1858). Greatly admired as a master landscape painter, he was advised by Alexander von Humboldt to travel West from Europe to record the spectacular landscapes of Chile, Argentina, and Mexico. Rugendas did in fact become one of the best of the nineteenth-century European painters to venture into Latin America. However this is not a biography of Rugendas. This work of fiction weaves an almost surreal history around the secret objective behind Rugendas' trips to America: to visit Argentina in order to achieve in art the "physiognomic totality" of von Humboldt's scientific vision of the whole. Rugendas is convinced that only in the mysterious vastness of the immense plains will he find true inspiration. A brief and dramatic visit to Mendosa gives him the chance to fulfill his dream. From there he travels straight out onto the pampas, praying for that impossible moment, which would come only at an immense pricean almost monstrously exorbitant price that would ultimately challenge his drawing and force him to create a new way of making art. A strange episode that he could not avoid absorbing savagely into his own body interrupts the trip and irreversibly and explosively marks him for life.

CÉSAR AIRA was born in Coronel Pringles, Argentina in 1949, and has lived in Buenos Aires since 1967. He taught at the University of Buenos Aires (about Copi and Rimbaud) and at the University of Rosario (Constructivism and Mallarmé), and has translated and edited books from France, England, Italy, Brazil, Spain, Mexico, and Venezuela. Perhaps one of the most prolific writers in Argentina, and certainly one of the most talked about in Latin America, Aira has published more than 100 books to date in Argentina, Mexico, Colombia, Venezuela, Chile, and Spain, which have been translated for France, Great Britain, Italy, Brazil, Portugal, Greece, Austria, Romania, Russia, and the United States. One novel, La prueba, has been made into a feature film, and How I Became a Nun was chosen as one of Argentina’s ten best books. Besides essays and novels Aira writes regularly for the Spanish newspaper El País. In addition to winning the 2021 Formentor Prize, he has received a Guggenheim scholarship, and was shortlisted for the Rómulo Gallegos prize and the Booker International Prize.

Chris Andrews was born in Newcastle, Australia, in 1962. He studied at the University of Melbourne and taught there, in the French program, from 1995 to 2008. He also taught at the University of Western Sydney, where he was a member of the Writing and Society Research Center. As well as translating nine books by Roberto Bolano and ten books (and counting) by César Aira, he also brought the French author Kaouther Adimi’s Our Riches into English for New Directions. Andrews has won the Valle-Inclán Prize and the French-American Foundation Translation Prize for his translations. Additionally, he has published the critical studies Poetry and Cosmogony: Science in the Writing of Queneau and Ponge and Roberto Bolano's Fiction: An Expanding Universe as well as two collections of poems, Cut Lunch and Lime Green Chair, for which he won the Anthony Hecht Poetry Prize.

Author of 2666 and many other acclaimed works, Roberto Bolano (1953-2003) was born in Santiago, Chile, and later lived in Mexico, Paris, and Spain. He has been acclaimed “by far the most exciting writer to come from south of the Rio Grande in a long time” (Ilan Stavans, The Los Angeles Times),” and as “the real thing and the rarest” (Susan Sontag). Among his many prizes are the extremely prestigious Herralde de Novela Award and the Premio Rómulo Gallegos. He was widely considered to be the greatest Latin American writer of his generation. He wrote nine novels, two story collections, and five books of poetry, before dying in July 2003 at the age of 50.

May it herald many more such unsettling and elegant parables to come.
— Mark Doty - Los Angeles Times

Aira oversteps the bounds of realism, forcing the world to live up to his imagination.
— Benjamin Lytal - New York Sun

I’m about to reread César Aira’s An Episode in the Life of a Landscape Painter once again. The book’s mere 87 pages are so multi­faceted and transporting and I get so absorbed that upon finishing I don’t remember anything. Like having a complex cinematic dream that dissipates upon awakening.