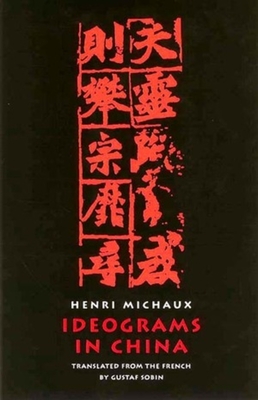 Previously available only as a limited editon, Henri Michaux's Ideograms in China is now available as a New Directions paperback. Peerlessly translated by the American poet Gustaf Sobin, this long, beautifully illustrated and annotated prose poem was originally written as an introduction to Leon Chang's La calligraphie chinoise (1971), a work that now stands as an important complement to Pound and Ernest Fenollosa's classic study, The Chinese Written Character as a Medium for Poetry.

Allen Ginsberg called Michaux a genius, and Jorge Luis Borges said that his work is without equal in the literature of our time. Henri Michaux (1899-1984) wrote Ideograms in China as an introduction to Leon Chang’s La calligraphie chinoise (1971), a work that now stands as an important complement to Ezra Pound and Ernest Fenollosa’s classic study, The Chinese Written Character as a Medium for Poetry. Previously available only as a limited edition, Ideograms in China is a long, gorgeously illustrated and annotated prose poem containing a very deep consideration of the world’s oldest living language. Poet Gustaf Sobin’s luminous English version beautifully captures the astounding and strange French original. For Michaux, the Chinese culture ranked as the world’s richest, a culture grounded in its written language, which bound China together through three millennia and across its enormous territories. Ideograms in China presents an oblique history of that culture through the changing variety and beauty of the ideograms: Michaux looks into a dozen scripts––from ancient bronze vessels bearing ku-wen script to running script to standard k’ai-shu characters––and the poem carries the rhythms of someone discovering the soul of a civilization in its impression of ink on paper.

Henri Michaux (1899–1984), born in Belgium, studied mysticism as a young man and traveled throughout South America and Asia before settling in Paris. He wrote more than twenty volumes of poetry and prose and showed paintings he created under the influence of mescaline. In 1965 he was awarded the French National Prize for Letters but refused the award, saying that it threatened his independence.

Gustaf Sobin is a poet and author of The Fly-Truffler. American-born, he has lived in Provence for nearly forty years.