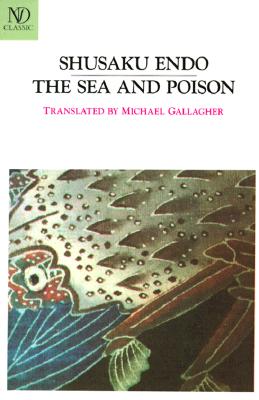 By Shusaku Endo, Michael Gallagher (Translated by)
$15.95
On Our Shelves

The novel The Sea and Poison won the Akutagawa Prize when it was published in Japan in 1958 and established Shusaku Endo in the forefront of modern Japanese literature.

The Sea and Poison was the first Japanese book to confront the problem of individual responsibility in wartime, painting a searing picture of the human race’s capacity for inhumanity. At the outset of this powerful story we find a Doctor Suguro in a backwater of modern-day Tokyo practicing expert medicine in a dingy office. He is haunted by his past experience and it is that past which the novel unfolds. During the war Dr. Suguro serves his internship in a hospital where the senior staff is more interested in personal career-building than in healing. He is induced to assist in a horrifying vivisection of a POW. "What is it that gets you," one of his colleagues asks. "Killing that prisoner? The conscience of man, is that it?"

Shusaku Endo (1923–1996) is widely regarded as one of the most important Japanese authors of the late twentieth century. He won many major literary awards and was nominated for the Nobel Prize several times. His novel Silence was recently made into a major film directed by Martin Scorsese.

... the novel is compulsively readable. We are fascinated even as we are repelled by these characters' moral corruption and their slow, inevitable decline.
— Publishers Weekly