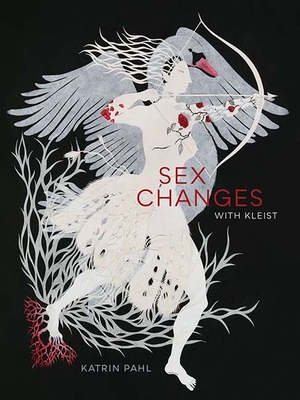 By Katrin Pahl
$34.95
Email or call for availability

Sex Changes with Kleist analyzes how the dramatist and poet Heinrich von Kleist (1777–1811) responded to the change in the conception of sex and gender that occurred in the eighteenth century. Specifically, Katrin Pahl shows that Kleist resisted the shift from a one-sex to the two-sex and complementary gender system that is still prevalent today. With creative close readings engaging all eight of his plays, Pahl probes Kleist’s appreciation for incoherence, his experimentation with alternative symbolic orders, his provocative understanding of emotion, and his camp humor. Pahl demonstrates that rather than preparing modern homosexuality, Kleist puts an end to modern gender norms even before they take hold and refuses the oppositional organization of sexual desire into homosexual and heterosexual that sprouts from these norms.

Focusing on the theatricality of Kleist’s interventions in the performance of gender, sexuality, and emotion and examining how his dramatic texts unhinge major tenets of classical European theater, Sex Changes with Kleist is vital reading for anyone interested in queer studies, feminist studies, phttp://tme.firebrandtech.com/NUPress/Images/Look/icons/view.pngerformance studies, literary studies, or emotion studies. This book changes our understanding of Kleist and breathes new life into queer thought.

KATRIN PAHL is an associate professor of German at Johns Hopkins University. She is the author of Tropes of Transport: Hegel and Emotion.

“At a moment when we are struggling with the sex-gendering power of language, Katrin Pahl argues that Heinrich Kleist’s world of words put an end to modern gender and sex norms—before they were codified. And indeed, Pahl’s critical analyses of the untimely author give us a fresh language to describe our world anew.” —Randall Halle, author of Queer Social Philosophy: Critical Readings from Kant to Adorno

“Describing Kleist’s work as part of a 'broken temporality' that upends some of our cherished beliefs about the history of sexuality, Pahl offers a wide-ranging and original account of 'historical sex change.' This book will be of great interest to scholars in queer studies, theater, comparative literature but also to anyone interested in the early history of modern gender norms. Sex Changes with Kleist is surprising, erudite and unusual and offers stunning readings of a lost queer past conjured through an aesthetics of incoherence and ambivalence. Brilliant.” —Jack Halberstam, author of The Queer Art of Failure

"Though she grounds her arguments in Lacanian and queer theory, Pahl uses her close readings of Kleist’s theatrical writings not only as a way to explore issues of sex, language, and gender but also to present Kleist as a modern who developed a mode of rationality that tolerates mess, presents new forms of emotion, and rewrites theatrical convention. The book is an innovative contribution to Kleist scholarship and queer studies and deserves
attention in these and related fields. Highly recommended." —Choice

"If Kleist and Pahl have given us a German lesson . . . it is to show us that Kleist’s texts give the lie to narrowly gendered, 'heroic' images of resistance and allow us to think of resistance otherwise—queerly and comically." —Barbara N. Nagel, Public Books