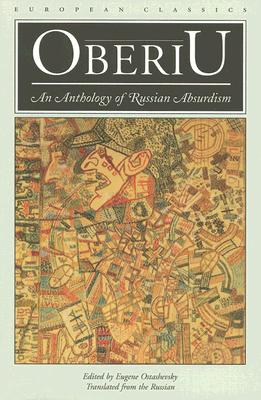 OBERIU is an anthology of short works by three leading Russian absurdists: Alexander Vvedensky, Daniil Kharms, and Nikolai Zabolotsky. Between 1927 and 1930, the three made up the core of an avant-garde literary group called OBERIU (from an acronym standing for The Union of Real Art). It was a movement so artfully anarchic, and so quickly suppressed, that readers only began to discover its strange and singular brilliance three decades after it was extinguished—and then only in samizdat and émigré publications.

Some called it the last of the Russian avant-garde, and others called it the first (and last) instance of Absurdism in Russia. Though difficulty to pigeon-hole, OBERIU and the pleasures of its poetry and prose are, with this volume, at long last fully open to English-speaking readers. Skillfully translated to preserve the weird charm of the originals, these poems and prose pieces display all the hilarity and tragedy, the illogical action and puppetlike violence and eroticism, and the hallucinatory intensity that brought down the wrath of the Soviet censors. Today they offer an uncanny reflection of the distorted reality they reject.

EUGENE OSTASHEVSKY is a master teacher of the humanities in the General Studies program at New York University. In 2003 he won the Wytter Bynner Foundation Translation Prize.

MATVEI YANKELEVICH is a doctoral student in comparative literature at the Graduate Center of the City University of New York and the editor of the Eastern European Poets Series for Ugly Duckling Presse, where he also co-edits 6x6 magazine.

"For anyone intersted in Soviet literature, this book fills an enormous gap. It also presents some beautiful, heartbreaking poetry." —Publishers Weekly

"The work of Oberiu is as relevant to our moment as when it was written."  —The Believer

"Oberiu is as relevant today as ever." —BookForum