Feeble-Minded in Our Midst: Institutions for the Mentally Retarded in the South, 1900-1940 (Paperback) 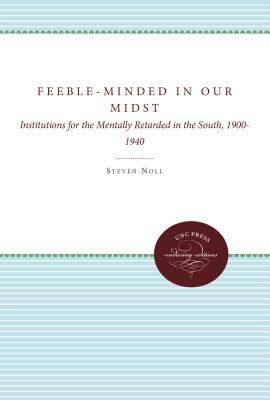 The problem of how to treat the mentally handicapped attracted much attention from American reformers in the first half of the twentieth century. In this book, Steven Noll traces the history and development of institutions for the 'feeble-minded' in the South between 1900 and 1940. He examines the influences of gender, race, and class in the institutionalization process and relates policies in the South to those in the North and Midwest, regions that had established similar institutions much earlier. At the center of the story is the debate between the humanitarians, who advocated institutionalization as a way of protecting and ministering to the mentally deficient, and public policy adherents, who were primarily interested in controlling and isolating perceived deviants. According to Noll, these conflicting ideologies meant that most southern institutions were founded without a clear mission or an understanding of their relationship to southern society at large. Noll creates a vivid portrait of life and work within institutions throughout the South and the impact of institutionalization on patients and their families. He also examines the composition of the population labeled feeble-minded and demonstrates a relationship between demographic variables and institutional placement, including their effect on the determination of a patient's degree of disability.