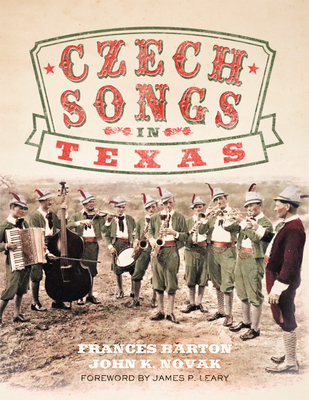 On any weekend in Texas, Czech polka music enlivens dance halls and drinking establishments as well as outdoor church picnics and festivals. The songs heard at these venues are the living music of an ethnic community created by immigrants who started arriving in Central Texas in the mid-nineteenth century from what is now the Czech Republic. Today, the members of this community speak English but their songs are still sung in Czech. Czech Songs in Texas includes sixty-one songs, mostly polkas and waltzes. The songs themselves are beloved heirlooms ranging from ceremonial music with origins in Moravian wedding traditions to exuberant polkas celebrating the pleasures of life. For each song, the book provides music notation and Czech lyrics with English translation. An essay explores the song's European roots, its American evolution, and the meaning of its lyrics and lists notable performances and recordings. In addition to the songs and essays, Frances Barton provides a chapter on the role of music in the Texas Czech ethnic community, and John K. Novak surveys Czech folk and popular music in its European home. The book both documents a specific musical inheritance and serves as a handbook for learning about a culture through its songs. As folklorist and polka historian James P. Leary writes in his foreword, "Barton and Novak take us on a poetic, historical, and ethnographic excursion deep into a community's expressive heartland. Their Czech Songs in Texas just might be the finest extant annotated anthology of any American immigrant/ethnic group's regional song tradition."