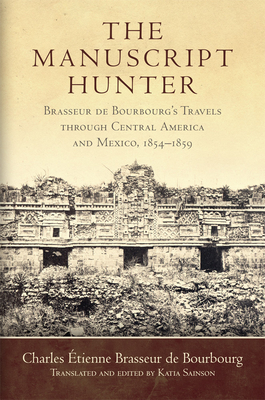 
In two decades of traveling throughout Mexico, Central America, and Europe, French priest Charles tienne Brasseur de Bourbourg (1814-1874) amassed hundreds of indigenous manuscripts and printed books, including grammars and vocabularies that brought to light languages and cultures little known at the time. Although his efforts yielded many of the foundational texts of Mesoamerican studies--the pre-Columbian Codex Troana, the only known copies of the Popol Vuh and the indigenous dance drama Rabinal-Achi, and Diego De Landa's Relaci n de la cosas de Yucat n--Brasseur earned disdain among scholars for his theories linking Maya writings to the mythical continent of Atlantis. In The Manuscript Hunter, translator Katia Sainson reasserts his standing as the founder of modern Maya studies, presenting three of his travel writings in English for the first time. While civil wars raged throughout Mexico and Central America and foreign interests sought access to the region's rich resources, Brasseur focused on uncovering Mesoamerica's mysterious past by examining its ancient manuscripts and living oral traditions. His "Notes from a Voyage in Central America," "From Guatemala City to Rabinal," and Voyage across the Isthmus of Tehuantepec document his travels in search of these texts and traditions. Brasseur's writings weave vivid geographical descriptions of Central America and Mexico during the mid-1800s with keen social and political analysis, all steeped in vast knowledge of the region's history and interest in its indigenous cultures. Coupled with Sainson's thoughtful introduction and annotations, these captivating, accessible accounts reveal Brasseur de Bourbourg's true accomplishments and offer an unrivaled view of the birth of Mesoamerican studies in the nineteenth century. Brasseur's writings not only depict Central America and Mexico through the eyes of a European traveler at a key moment, but also illuminate the remarkable efforts of one man to understand and preserve Mesoamerica's cultural traditions for all time.