The Great Partnership: Science, Religion, and the Search for Meaning (Hardcover) 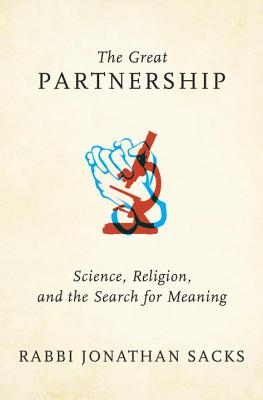 By Jonathan Sacks
$28.95
This book is out of stock indefinitely, unable to order at this time.

An impassioned, erudite, thoroughly researched, and beautifully reasoned book from one of the most admired religious thinkers of our time that argues not only that science and religion are compatible, but that they complement each other and that the world needs both.
Atheism deserves better than the new atheists, states Rabbi Jonathan Sacks, whose methodology consists of criticizing religion without understanding it, quoting texts without contexts, taking exceptions as the rule, confusing folk belief with reflective theology, abusing, mocking, ridiculing, caricaturing, and demonizing religious faith and holding it responsible for the great crimes against humanity. Religion has done harm; I acknowledge that. But the cure for bad religion is good religion, not no religion, just as the cure for bad science is good science, not the abandonment of science.
Rabbi Sacks's counterargument is that religion and science are the two essential perspectives that allow us to see the universe in its three-dimensional depth. Science teaches us where we come from. Religion explains to us why we are here. Science is the search for explanation. Religion is the search for meaning. We need scientific explanation to understand nature. We need meaning to understand human behavior. There have been times when religion tried to dominate science. And there have been times, including our own, when it is believed that we can learn all we need to know about meaning and relationships through biochemistry, neuroscience, and evolutionary psychology. In this fascinating look at the interdependence of religion and science, Rabbi Sacks explains why both views are tragically wrong.

Rabbi Jonathan Sacks has been Chief Rabbi of the United Hebrew Congregations of Great Britain and the Commonwealth since 1991 and has received honorary degrees from universities around the world. He is the award-winning author of more than twenty books, writes frequently for The Times (London) and other periodicals, and is heard regularly on the BBC. He was made a Life Peer and took his seat in the House of Lords in October 2009.

“A figure of great stature and sometimes the center of controversy in England, where he has served as chief rabbi for two decades, Rabbi Sacks is certain to add to both his stature and the controversy that surrounds him with the publication of The Great Partnership. . . . Society needs both religion and science, Sacks argues in this innovative, articulate, and well-documented book.  He effortlessly includes statistics and history, personal stories and culture-wide experiences, all of it making clear the differences he sees between the Weltanschauung of his world and that of the atheist.”
—The Jewish Week

“The Great Partnership is illuminating and sometimes genuinely moving, because of the erudition and the warm personality with which Rabbi Sacks unrolls his credo. . . . It makes a persuasive case that the bloody rhetorical war between ‘science’ and ‘religion’ is not just unnecessary; it is foolish. . . . A humane, learned cri de coeur.”
—The Wall Street Journal

“In prose that is both stately and accessible, Rabbi Sacks offers an examination of the most profound issues of faith and science that is both intellectually rigorous and generous in spirit.  With an impressive range of scholarship that extends far beyond the Jewish tradition, he marshals an array of arguments for the proposition that ‘we need both religion and science.’ ”
—Shelf Awareness

“In clear language Sacks sets forth the arguments put forward by atheists, respectfully demolishing them in favor of the religious stance that he forthrightly espouses.  The range and depth of his familiarity with authorities in both camps are most impressive [and] his erudite position is largely compelling. . . .  Essential reading because of Sacks’s splendid range of knowledge and his powerful ability to tackle tough issues.”
—Publishers Weekly

“A brilliant exposition of the possibility of science and religion, each in its own way, contributing to a better world.”
—Kirkus Reviews (starred review)

“There is a warm, accessible scholarship about Rabbi Sacks; it’s easy to see why he is such a popular sage. The Great Partnership will only burnish this reputation. After several years in which the new atheists—Dawkins, Hitchens, Hawking—have made all the running, Sacks offers an intelligent, optimistic credo that allows for the happy coexistence of science and religion. . . . For those people who know that science is right but still want to believe, this cake-and-eat-it argument is made with erudition, scholarship, and charm.”
—The Times (London)

“The learned and humane Sacks normally speaks from within the Jewish tradition. But here he is much more inclusive, drawing from Judaism, Christianity and, he claims, Islam . . . His erudition is extensive [and he] is engaging and thought-provoking throughout. His exploration of the deep differences between classical Greek and Hebrew thought is quite brilliant. . . . Without a doubt he is a wise thinker and a national treasure.”
—The Independent