The Yom Kippur War: The Epic Encounter That Transformed the Middle East (Paperback) 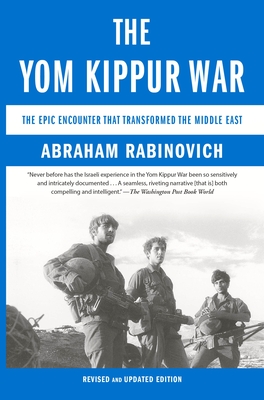 An updated edition that sheds new light on one of the most dramatic reversals of military fortune in modern history.

The easing of Israeli military censorship after four decades has enabled Abraham Rabinovich to offer fresh insights into this fiercest of Israel-Arab conflicts. A surprise Arab attack on two fronts on the holiest day of the Jewish calendar, with Israel’s reserves un-mobilized, triggered apocalyptic visions in Israel, euphoria in the Arab world, and fraught debates on both sides. Rabinovich, who covered the war for The Jerusalem Post, draws on extensive interviews and primary source material to shape his enthralling narrative. We learn of two Egyptian nationals, working separately for the Mossad, who supplied Israel with key information that helped change the course of the war; of Defense Minister Moshe Dayan’s proposal for a nuclear “demonstration” to warn off the Arabs; and of Chief of Staff David Elazar’s conclusion on the fifth day of battle that Israel could not win. Newly available transcripts enable us to follow the decision-making process in real time from the prime minister’s office to commanders studying maps in the field. After almost overrunning the Golan Heights, the Syrian attack is broken in desperate battles. And as Israel regains its psychological balance, General Ariel Sharon leads a nighttime counterattack across the Suez Canal through a narrow hole in the Egyptian line -- the turning point of the war.

ABRAHAM RABINOVITCH, a United States Army veteran, worked as a reporter for Newsday before joining The Jerusalem Post. His writing has appeared in The New York Times, The Wall Street Journal, The Christian Science Monitor, the International Herald Tribune, and The New Republic, among other periodicals. He is the author of five previous books, including The Battle for Jerusalem and The Boats of Cherbourg. Born in New York City, he lives in Jerusalem.

"Never before has the Israeli experience in the Yom Kippur War been so sensitively and intricately documented . . .  A seamless, riveting narrative [that is] both compelling and intelligent."
—The Washington Post Book World

"The best general history of the Yom Kippur War. The writing is clear, compelling, and precise and offers a good understanding of both the military operations and the political developments. At both levels it was a fascinating war. . . .Outstanding."
—Ha'aretz

"Rabinovich's extra efforts to get inside the minds of Arab generals are especially welcome. . . . sheds light on a conflict that altered the psychology and diplomacy of the Middle East down to the present day."
—The New York Times Book Review

"Superbly written. . . . The Yom Kippur War is easily the best and most complete general history of the conflict."
—Parameters

"As no one before, Abraham Rabinovich recounts the whole story of the 1973 Yom Kippur War, that most elusive round of the Arab-Israeli conflict."
—Middle East Quarterly

"Superb. I have found few works of military history so difficult to put down."
—Jerusalem Report

"Impossible to put down."
—Gershom Gorenberg, author of Days of Awe

"Its revelations are astonishing. Its prose is gripping. Its conclusions, richly documented and austerely objective, are intensely relevant to the Middle Eastern crisis of our own day."
—Professor Howard M. Sachar, author of A History of Israel