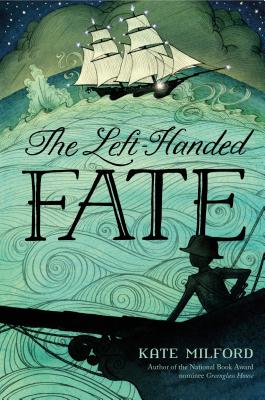 Age of Sail fighting ships, miraculous and improbable weapons, questions of loyalty and patriotism, with antagonists earthly and uncanny. A wise reviewer described this historical fantasy as Patrick O'Brian's Captain Aubrey series seen through the lens of Hayao Miyazaki, which is just about right.

Return to Nagspeake for a new fantasy adventure from the bestselling author of National Book Award nominee Greenglass House.

Lucy Bluecrowne and Maxwell Ault are on a mission: find the three pieces of a strange and arcane engine they believe can stop the endless war raging between their home country of England and Napoleon Bonaparte’s France. During the search, however, their ship, the famous privateer the Left-Handed Fate, is taken by the Americans, who have just declared war on England, too. The Fate (and with it, Lucy and Max) is put under the command of new midshipman Oliver Dexter . . . who’s only just turned twelve.

But Lucy and Max aren’t the only ones trying to assemble the engine; the French are after it, as well as the crew of a mysterious vessel that seems able to appear out of thin air. When Oliver discovers what his prisoners are really up to—and how dangerous the device could be if it falls into the wrong hands—he is faced with a choice: Help Lucy and Max even if it makes him a traitor to his own country? Or follow orders and risk endangering countless lives, including those of the enemies who have somehow become his friends?

Kate Milford is the author of The Boneshaker, The Broken Lands, The Kairos Mechanism, Bluecrowne, andGreenglass House, which was long-listed for the National Book Award. Originally from Annapolis, Maryland, Kate now lives in Brooklyn, New York, with her family.

Eliza Wheeler is the author-illustrator of MISS MAPLE'S SEEDS (Penguin), which debuted on the New York Times Best Seller list. She has illustrated many children’s books, including JOHN RONALD’S DRAGONS: THE STORY OF J.R.R. TOLKIEN (Caroline McAlister), TELL ME A TATTOO STORY (Alison McGhee), WHEREVER YOU GO (Pat Zietlow Miller), and Newbery Honor winning novel DOLL BONES (Holly Black). Eliza received the SCBWI National Grand Prize Award for best portfolio in 2011. She lives with her husband in Minnesota.

"This world has a seductive, fairytale quality – Patrick O’Brian’s Captain Aubrey series as seen through the lens of Hayao Miyazaki. . . It's impossible not to admire The Left-Handed Fate for its epic scope, joyful evocation of life on the high seas and suspenseful mystery." —The New York Times Book Review

"Rich and strange of place and premise; suspenseful and thought-provoking." —Kirkus Reviews, starred review, on The Left-Handed Fate

"the story teems with lively characters and a captivating sense of place, all driven along by the engrossing puzzle of the mysterious contraption. . . . A colorful, swashbuckling caper full of heart." —Booklist on The Left-Handed Fate

"The idea of achieving peace through superior firepower is effectively questioned over the course of the narrative, but it is the human questions of honor, courage, and generosity—embodied in decisive Lucy, philosophical Max, impish Liao, and dutiful Oliver—that will leave readers cheering by the book’s rousing close." —The Horn Book on The Left-Handed Fate

"Give this one to fans of Trenton Lee Stewart's The Mysterious Benedict Society." -School Library Journal