An Army at Dawn: The War in North Africa, 1942-1943, Volume One of the Liberation Trilogy (Paperback) 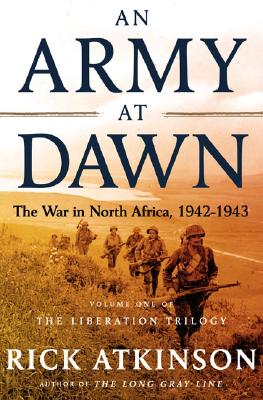 WINNER OF THE PULITZER PRIZE AND NEW YORK TIMES BESTSELLER The liberation of Europe and the destruction of the Third Reich is a story of miscalculation and incomparable courage, of calamity and enduring triumph. In this first volume of the Liberation Trilogy, Rick Atkinson focuses on 1942 and 1943, showing how central the great drama that unfolded in North Africa was to the ultimate victory of the Allied powers and to America's understanding of itself.

Opening with the daring amphibious invasion in November 1942, An Army at Dawn follows the American and British armies as they fight the French in Morocco and Algiers, and then take on the Germans and Italians in Tunisia. Battle by battle, an inexperienced and often poorly led army gradually becomes a superb fighting force. Central to the tale are the extraordinary but flawed commanders who come to dominate the battlefield: Eisenhower, Patton, Bradley, Montgomery, and Rommel.

Rick Atkinson is a staff writer for "The Washington Post," currently on assignment in Iraq. He is the bestselling author of "The Long Gray Line "and "Crusade." His many awards include the Pulitzer Prize. He lives in Washington, D.C.

"An Army at Dawn may be the best World War II battle narrative since Cornelius Ryan's classics, The Longest Day and A Bridge Too Far." -The Wall Street Journal

"A splendid book . . . The emphasis throughout is on the human drama of men at war." -The Washington Post Book World

"Atkinson's account will be a monument among accounts of World War II." -John S. D. Eisenhower, author of Allies and The Bitter Woods

"A master of the telling profile . . . This vivid, personality-driven account of the campaign to drive Axis forces from North Africa shows the political side of waging war, even at the tactical level." -Chicago Tribune

"An Army at Dawn is more than a military history, it is a social and psychological inquiry as well." -Paul Fussell, author of Doing Battle and Wartime

"Brilliant . . . This is history and war in the hands of a gifted and unflinching writer." -The Kansas City Star