From the Holy Mountain: A Journey among the Christians of the Middle East (Paperback) 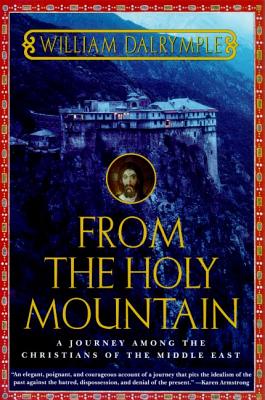 In 587 a.d., two monks set off on an extraordinary journey that would take them in an arc across the entire Byzantine world, from the shores of the Bosphorus to the sand dunes of Egypt. On the way John Moschos and his pupil Sophronius the Sophist stayed in caves, monasteries, and remote hermitages, collecting the wisdom of the stylites and the desert fathers before their fragile world finally shattered under the great eruption of Islam. More than a thousand years later, using Moschos's writings as his guide, William Dalrymple sets off to retrace their footsteps and composes "an evensong for a dying civilization" --Kirkus Reviews, starred review

William Dalrymple is the bestselling author of In Xanadu, City of Djinns, From the Holy Mountain, The Age of Kali, White Mughals, The Last Mughal and, most recently, Nine Lives. He has won the Thomas Cook Travel Book Award, the Sunday Times Young British Writer of the Year Award, the Ryszard Kapuscinski Award for Literary Reportage, the Hemingway Prize, the French Prix d'Astrolabe, the Wolfson Prize for History, the Scottish Book of the Year Award, the Duff Cooper Memorial Prize, the Asia House Award for Asian Literature, the Vodafone Crossword Award and has three times been longlisted for the Samuel Johnson Prize. In 2012 he was appointed Whitney J. Oates Visiting Fellow in Humanities at Princeton University. He lives with his wife and three children on a farm outside Delhi.

“Elegant, poignant . . . courageous . . . pitting the idealism of the past against the hatred, dispossession, and denial of the present.” —Karen Armstrong, author of History of God

“This splid book should take its rightful place on the same shelf as Chatwin's In Patagonia. [It is] rich with the poetry of antique places and transports the fascinated reader smoothly into a vanishing world . . . There are, finally, innumerable wonderful stories in From the Holy Mountain.” —Michael Dirda, The Washington Post Book World

“Dalrymple is a born travel writer, with a nose for adventure and a reporter's healthy skepticism. His quirky, exhilarating mosaic will appeal to readers of all faiths.” —Publishers Weekly (starred review)