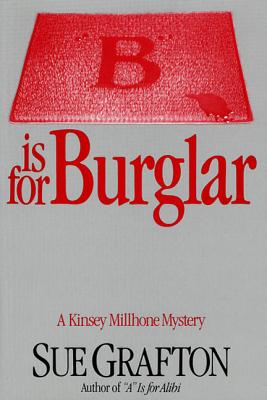 This is book number 2 in the Kinsey Millhone Alphabet Mysteries series.

Beverly Danziger looked like an expensive, carefully wrapped package from a good but conservative shop. Only her compulsive chatter hinted at the nervousness beneath her cool surface. It was a nervousness out of all proportion to the problem she placed before Kinsey Millhone. There was an absent sister. A will to be settled--a matter of only a few thousand dollars. Mrs. Danziger did not look as if she needed a few thousand dollars. And she didn't seem like someone longing for a family reunion.

Still, business was slow, and even a private investigator has bills to pay. Millhone took the job. It looked routine.

Elaine Boldt's wrappings were a good deal flashier than her sister's, but they signaled the same thing: The lady had money. A rich widow in her early forties, she owned a condo in Boca Raton and another in Santa Teresa. According to the manager of the California building, she was last seen draped in her $12,000 lynx coat heading for Boca Raton. According to the manager of the Florida building, she never got there. But someone else had and she was camping out illegally in Mrs. Boldt's apartment. The job was beginning to seem a bit less routine.

It turned tricky when Beverly Danziger ordered Millhone to drop the case and it took on an ominous quality when Aubrey Danziger surfaced, making all kinds of wild accusations about his wife. But it only became sinister when Millhone learned that just days before Elaine Boldt went missing, her next-door neighbor and bridge partner had been murdered and the killer was still at large.

A house destroyed by arson. A brutally murdered a woman. A missing lynx coat. An apartment burgled of valueless papers, another ransacked in a melée of mindless destruction. And more murder. As Millhone digs deeper into the case, she finds herself in a nightmarish hall of mirrors in which reality is distorted by illusion and nothing--except danger--is quite what it seems.

“Millhone is an engaging detective-for-hire…P.I. Kinsey Millhone and her creator…are arguably the best of [the] distaff invaders of the hitherto sacrosanct turf of gumshoes.” —The Buffalo News

“Once a fan reads one of Grafton's alphabetically titled detective novels, he or she will not rest until all the others are found.” —Los Angeles Herald Examiner

“Tough but compassionate…There is no one better than Kinsey Millhone.” —Best Sellers

“A woman we feel we know, a tough cookie with a soft center, a gregarious loner.” —Newsweek

“Lord, how I like this Kinsey Millhone…The best detective fiction I have read in years.” —The New York Times Book Review

“Smart, tough, and thorough…Kinsey Millhone is a pleasure.” —The Bloomsbury Review

“Kinsey is one of the most persuasive of the new female operatives…She's refreshingly free of gender clichés. Grafton, who is a very witty writer, has also given her sleuth a nice sense of humor--and a set of Wonder Woman sheets to prove it.” —Boston Herald

“What grandpa used to call a class act.” —Stanley Ellin

“Kinsey's got brains and a sense of humor.” —Kirkus Reviews