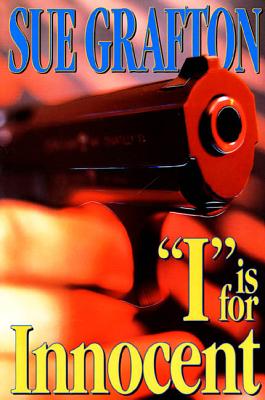 This is book number 9 in the Kinsey Millhone Alphabet Mysteries series.

Readers of Sue Grafton's fiction know she never writes the same book twice, and "I" Is For Innocent is no exception. Her most intricately plotted novel to date, it is layered in enough complexity to baffle even the cleverest among us.

Lonnie Kingman is in a bind. He's smack in the middle of assembling a civil suit, and the private investigator who was doing his pretrial legwork has just dropped dead of a heart attack. In a matter of weeks the court's statute of limitations will put paid to his case. Five years ago David Barney walked when a jury acquitted him of the murder of his rich wife, Isabelle. Now Kingman, acting as attorney for the dead woman's ex-husband and their child (and sure that the jury made a serious mistake), is trying to divest David Barney of the profits of that murder. But time is running out, and David Barney still swears he's innocent.

Patterned along the lines of a legal case, "I" Is For Innocent is seamlessly divided into thirds: one-third of the novel is devoted to the prosecution, one-third to the defense, and a final third to cross-examination and rebuttal. The result is a trial novel without a trial and a crime novel that resists solution right to the end.

When Kinsey Millhone agrees to take over Morley Shine's investigation, she thinks it is a simple matter of tying up the loose ends. Morley might have been careless about his health, but he was an old pro at the business. So it comes as a real shock when she finds his files in disarray, his key informant less than credible, and his witnesses denying ever having spoken with him. It comes as a bigger shock when she finds that every claim David Barney has made checks out. But if Barney didn't murder his wife, who did? It would seem the list of candidates is a long one. In life, Isabelle Barney had stepped on a lot of toes.

In "I" Is For Innocent, Sue Grafton once again demonstrates her mastery of those telling details that reveal our most intimate and conflicted relationships. As Kinsey comments on the give-and-take by which we humans deal with each other, for better and sometimes for worse, the reader is struck yet again by how acute a social observer Ms. Grafton can be. Frequently funny and sometimes caustic, she is also surprisingly compassionate-- understanding how little in life is purely black and white. Except for murder.

"I" Is For Innocent is Sue Grafton in peak form. Fast-paced. Funny. And very, very devious.

“Millhone is an engaging detective-for-hire…P.I. Kinsey Millhone and her creator…are arguably the best of [the] distaff invaders of the hitherto sacrosanct turf of gumshoes.” —The Buffalo News on the Kinsey Millhone Alphabet Mysteries

“Once a fan reads one of Grafton's alphabetically titled detective novels, he or she will not rest until all the others are found.” —Los Angeles Herald Examiner on the Kinsey Millhone Alphabet Mysteries

“A woman we feel we know, a tough cookie with a soft center, a gregarious loner.” —Newsweek on the Kinsey Millhone Alphabet Mysteries

“Lord, how I like this Kinsey Millhone…The best detective fiction I have read in years.” —The New York Times Book Review on the Kinsey Millhone Alphabet Mysteries

“Kinsey is one of the most persuasive of the new female operatives…She's refreshingly free of gender clichés. Grafton, who is a very witty writer, has also given her sleuth a nice sense of humor--and a set of Wonder Woman sheets to prove it.” —Boston Herald on the Kinsey Millhone Alphabet Mysteries

“What grandpa used to call a class act.” —Stanley Ellin on the Kinsey Millhone Alphabet Mysteries

“Kinsey's got brains and a sense of humor.” —Kirkus Reviews on the Kinsey Millhone Alphabet Mysteries