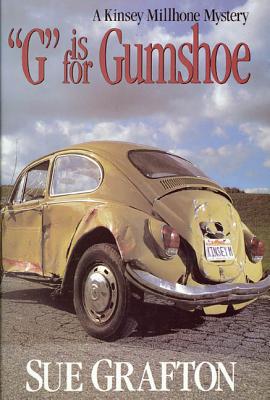 This is book number 7 in the Kinsey Millhone Alphabet Mysteries series.

For #1 New York Times bestselling author Sue Grafton's PI Kinsey Millhone, danger comes with the job—but she never expects to find herself at the top of a hit man's list…

G IS FOR GAME…

When Irene Gersh asks PI Kinsey Millhone to locate her elderly mother Agnes, whom she hasn't heard from in six months, it's not exactly the kind of case Kinsey jumps for. But a girl's gotta pay her bills, and this should be easy money—or so she thinks. Kinsey finds Agnes in a hospital. Aside from her occasional memory lapses, the octogenarian seems fine. And frightened.

Kinsey doesn't know what to make of Agnes's vague fears and bizarre ramblings, but she's got her own worries. It seems Tyrone Patty, a criminal she helped put behind bars, is looking to make a hit. First, Kinsey's car is run off the road, and then days later, she's almost gunned down, setting in motion a harrowing cat and mouse game…

G IS FOR GUMSHOE

So Kinsey decides to hire a bodyguard. With PI Robert Dietz watching her 24/7, Kinsey is feeling on edge…especially with their growing sexual tension. Then, Agnes dies of an apparent homicide, Kinsey realizes the old lady wasn't so senile after all—and maybe she was trying to tell her something? Now Kinsey's determined to learn the truth…even if it kills her.

“A wonderful character, tough but not brutish, resourceful and sensitive, a fit knight to walk those mean streets with her male predecessors.” —The Los Angeles Times on Kinsey Millhone

“A woman we feel we know, a tough cookie with a soft center, a gregarious loner.” —Newsweek on Kinsey Millhone

“Somebody I want to spend more time with.” —The New York Times Book Review on Kinsey Millhone