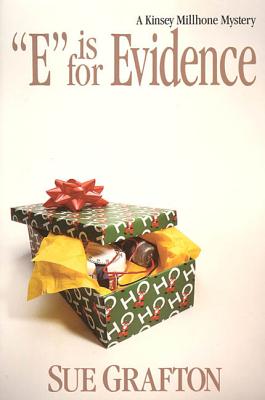 This is book number 5 in the Kinsey Millhone Alphabet Mysteries series.

No one writes a thriller like #1 New York Times bestselling author Sue Grafton. In E is for Evidence, PI Kinsey Millhone becomes the victim of a nasty frame-up…

E IS FOR EX

It was the silly season and a Monday at that, and Kinsey Millhone was bogged down in a preliminary report on a fire claim. Something was nagging at her, but she couldn't pin it. The last thing she needed in the morning mail was a letter from her bank recording an erroneous $5,000 deposit in her account. Kinsey had never believed in Santa Claus and she wasn't about to change her mind now. Resigning herself to a morning of frustration, she phoned the bank and, assaulted by canned carols, waited on hold for an officer to clear up the snafu.

It was with something less than Christmas cheer that Kinsey faced off only minutes later with California Fidelity's Mac Voorhies. Voorhies was smart, humorless, stingy with praise, and totally fair. He was frowning now.

"I got a phone call this morning." he said, his frown deepening. "Somebody says you're on the take."

Suddenly the $5,000 deposit clicked into place. It wasn't a mistake. It was a setup.

"E" is for evidence: evidence planted, evidence lost. "E" is for ex-lovers and evasions, enemies and endings. For Kinsey, "E" is for everything she stands to lose if she can't exonerate herself: her license, her livelihood, her good name. And so she takes on a new client: namely, Kinsey Millhone, thirty-two and twice-divorced, ex-cop and wisecracking loner, a California private investigator with a penchant for lost causes--one of which, it is to be hoped, is not herself.

As Kinsey begins to unravel the frame-up, she finds that her future is intimately tied to one family's past and to the explosive secret it has protected for almost twenty years. Digging deeper, she discovers that probing the past can have lethal consequences as she follows a trail of murder that leads to her own front door. And in what may well be her most challenging case, Kinsey comes up against the fact that sometimes, "E" is forever.

“Millhone is an engaging detective-for-hire…P.I. Kinsey Millhone and her creator…are arguably the best of [the] distaff invaders of the hitherto sacrosanct turf of gumshoes.” —The Buffalo News

“Once a fan reads one of Grafton's alphabetically titled detective novels, he or she will not rest until all the others are found.” —Los Angeles Herald Examiner

“Tough but compassionate…There is no one better than Kinsey Millhone.” —Best Sellers

“A woman we feel we know, a tough cookie with a soft center, a gregarious loner.” —Newsweek

“Lord, how I like this Kinsey Millhone…The best detective fiction I have read in years.” —The New York Times Book Review

“Smart, tough, and thorough…Kinsey Millhone is a pleasure.” —The Bloomsbury Review

“Kinsey is one of the most persuasive of the new female operatives…She's refreshingly free of gender clichés. Grafton, who is a very witty writer, has also given her sleuth a nice sense of humor--and a set of Wonder Woman sheets to prove it.” —Boston Herald

“What grandpa used to call a class act.” —Stanley Ellin

“Kinsey's got brains and a sense of humor.” —Kirkus Reviews