The Seventh Day: A Novel (Paperback) 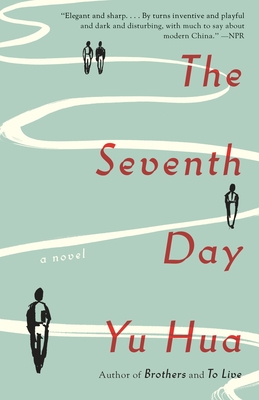 Having just crossed over, Yang Fei arrives in the afterlife which acts more as a waiting room for people who have yet to be cremated back on earth. Here, he meets the souls of people he's lost, whose stories from their lives offer us thoughtful observations of modern China. The stories, while often tragic, are told all so beautifully... and they show that when the physical world of greed, power, and status is removed, we're left with only the most fundamental aspects of our life: empathy, compassion, and human bonding.

Yang Fei was born on a train as it raced across the Chinese countryside. Lost by his mother, adopted by a young switchman, raised with simplicity and love, he is utterly unprepared for the changes that await him and his country. As a young man, he searches for a place to belong in a nation ceaselessly reinventing itself, but he remains on the edges of society.
At forty-one, he meets an unceremonious death, and lacking the money for a burial plot, must roam the afterworld aimlessly. There, over the course of seven days, he encounters the souls of people he’s lost. As he retraces the path of his life, we meet an extraordinary cast of characters: his adoptive father, his beautiful ex-wife, his neighbors who perished in the demolition of their homes. Vivid, urgent, and panoramic, Yang Fei’s passage movingly traces the contours of his vast nation—its absurdities, its sorrows, and its soul. This searing novel affirms Yu Hua’s place as the standard-bearer of Chinese fiction.

YU HUA is the author of five novels, six story collections, and four essay collections. He has also contributed op-ed pieces to The New York Times. His work has been translated into more than forty languages. He is the recipient of many awards, including the James Joyce Award, France's Prix Courrier International, and Italy's Premio Grinzane Cavour. He lives in Beijing.

“Elegant and sharp. . . . By turns inventive and playful and dark and disturbing, with much to say about modern China.” —NPR

“A political allegory for life—and death—experienced in the chaos of a rapidly changing modern China.” —Minneapolis Star Tribune

“A ghostly walk through contemporary China evokes the human cost of some of the big issues that nation is facing.” —The Toronto Star

“[A] poignant fable about family bonds made not of blood ties but unbreakable heartstrings. It will assuredly reward Yu’s readers, familiar and new.” —Library Journal (starred review)