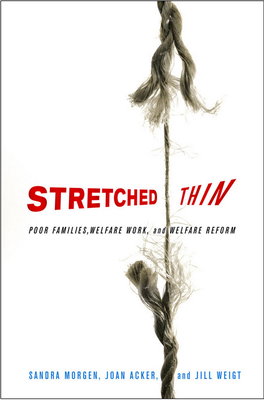 When the Personal Responsibility and Work Opportunity Reconciliation Act became law in 1996, the architects of welfare reform celebrated what they called the new consensus on welfare: that cash assistance should be temporary and contingent on recipients' seeking and finding employment. However, assessments about the assumptions and consequences of this radical change to the nation's social safety net were actually far more varied and disputed than the label consensus suggests.By examining the varied realities and accountings of welfare restructuring, Stretched Thin looks back at a critical moment of policy change and suggests how welfare policy in the United States can be changed to better address the needs of poor families and the nation. Using ethnographic observations, in-depth interviews with poor families and welfare workers, survey data tracking more than 750 families over two years, and documentary evidence, Sandra Morgen, Joan Acker, and Jill Weigt question the validity of claims that welfare reform has been a success. They show how poor families, welfare workers, and welfare administrators experienced and assessed welfare reform differently based on gender, race, class, and their varying positions of power and control within the welfare state.The authors document the ways that, despite the dramatic drop in welfare rolls, low-wage jobs and inadequate social supports left many families struggling in poverty. Revealing how the neoliberal principles of a drastically downsized welfare state and individual responsibility for economic survival were implemented through policies and practices of welfare provision and nonprovision, the authors conclude with new recommendations for reforming welfare policy to reduce poverty, promote economic security, and foster shared prosperity.

Sandra Morgen is Professor of Anthropology and Associate Dean of the Graduate School at the University of Oregon. She is author of books including Into Our Own Hands: The Women's Health Movement in the United States, 1969-1990 and coeditor most recently of Security Disarmed: Critical Perspectives on Gender, Race, and Militarization. Joan Acker is Professor Emerita of Sociology at the University of Oregon and author of Class Questions: Feminist Answers and Doing Comparable Worth: Gender, Class, and Pay Equity. Jill Weigt is Associate Professor of Sociology at California State University-San Marcos.