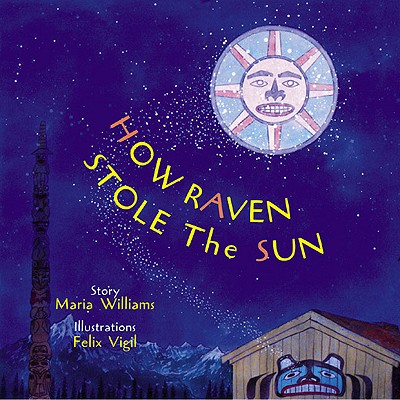 By Maria Williams, Felix Vigil (Illustrator)
$15.95
Not On Our Shelves - Available to Order

A long time ago, Raven was pure white, like fresh snow in winter. This was so long ago that the only light came from campfires, because a greedy chief kept the stars, moon, and sun locked up in elaborately carved boxes. Determined to free them, the shape-shifting Raven resourcefully transformed himself into the chief's baby grandson and cleverly tricked him into opening the boxes and releasing the starlight and moonlight. Though tired of being stuck in human form, Raven maintained his disguise until he got the chief to open the box with the sun and flood the world with daylight, at which point he gleefully transformed himself back into a raven. When the furious chief locked him in the house, Raven was forced to escape through the small smokehole at the top -- and that's why ravens are now black as smoke instead of white as snow.
This engaging Tlingit story is brought to life in painterly illustrations that convey a sense of the traditional life of the Northwest Coast peoples.
About the Tales of the People series:
Created with the Smithsonian's National Museum of the American Indian (NMAI), Tales of the People is a series of children's books celebrating Native American culture with illustrations and stories by Indian artists and writers. In addition to the tales themselves, each book also offers four pages filled with information and photographs exploring various aspects of Native culture, including a glossary of words in different Indian languages.