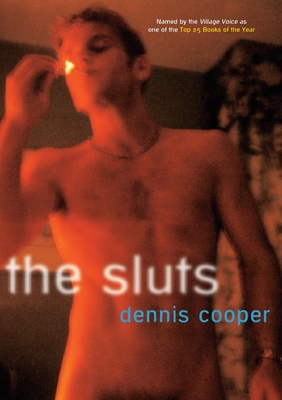 A prostitute who gets reviewed on a fictional site for potential johns is quickly swallowed up by a world of snuff films, grotesque fetishes, and the miasmal cloud of internet freaks obsessively chronicling/following/causing his decline. This vulgar, amoral, critique of our vicious web culture and the way we fetishize ‘celebrity’ deaths and demise could easily be written off as escapist, revolting, dangerous, porn...and ultimately it is a little bit of all of those things…

"Cooper deserves reassessment . . . this compelling page-turner ought to remind adventurous readers that important transgressive literature needn't be something only the French and the occasional perverted American can get behind." -- LA Weekly

Set largely on the pages of a website where gay male escorts are reviewed by their clients, and told through the postings, emails, and conversations of several dozen unreliable narrators, The Sluts chronicles the evolution of one young escort's date with a satisfied client into a metafiction of pornography, lies, half-truths, and myth. Explicit, shocking, comical, and displaying the author's signature flair for blending structural complexity with direct, stylish, accessible language, The Sluts is Cooper's most transgressive novel since Frisk, and one of his most innovative works of fiction to date.

Hailed as "the most important transgressive literary artist since Burroughs" (Salon), Dennis Cooper is the author of The George Miles Cycle, an interconnected sequence of five novels (Closer, Frisk, Try, Guide, and Period) that have been translated into sixteen languages. Cooper has also published a book of stories, Wrong, and several volumes of poetry, including The Dream Police. He lives in Los Angeles.