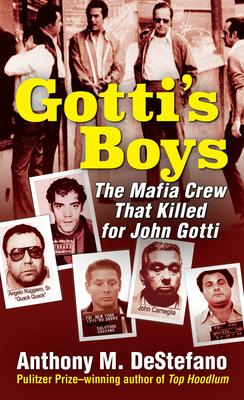 By Anthony M. DeStefano
$7.99
Unavailable
Not Yet Published - Other Formats May Be Available

In his bloody reign as the head of the Gambino crime family, John Gotti wracked up a lifetime of charges from gambling, extortion, and tax evasion to racketeering, conspiracy, and five convictions of murder. He didn’t do it alone. Surrounding himself with a rogues gallery of contract killers, fixers, and enforcers, he built one of the richest, most powerful and violent crime empires in modern history. Pulitzer Prize–winning journalist Anthony M. DeStefano takes you inside Gotti’s inner circle to reveal the dark hearts and murderous deeds of the most remorseless and cold-blooded characters in organized crime. Men so vicious even the other Mafia families were terrified of them. Meet Gotti’s Boys . . .

“DeStefano explores John Gotti’s rise to the head of the Gambino family . . . Aficionados are sure to relish the finer, exhaustively researched details.”
—Publishers Weekly

“A thrilling ride . . . DeStefano has written another excellent biography of a memorable group of gangsters and an excellent addition to the history of the Teflon Don.”
—Booklist

Pulitzer Prize-winning journalist Anthony M. DeStefano has covered organized crime for over three decades, including the crime beat for New York Newsday for the past twenty years. His books on organized crime include Gangland New York, King of the Godfathers, Mob Killer, and Vinny Gorgeous among others.