Trying Not to Try: Ancient China, Modern Science, and the Power of Spontaneity (Paperback) 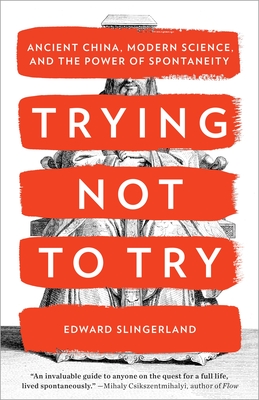 Why is it always hard to fall asleep the night before an important meeting? Or be charming and relaxed on a first date? What is it about a politician who seems wooden or a comedian whose jokes fall flat or an athlete who chokes? In all of these cases, striving seems to backfire.

In Trying Not To Try, Edward Slingerland explains why we find spontaneity so elusive, and shows how early Chinese thought points the way to happier, more authentic lives. We’ve long been told that the way to achieve our goals is through careful reasoning and conscious effort. But recent research suggests that many aspects of a satisfying life, like happiness and spontaneity, are best pursued indirectly. The early Chinese philosophers knew this, and they wrote extensively about an effortless way of being in the world, which they called wu-wei (ooo-way). They believed it was the source of all success in life, and they developed various strategies for getting it and hanging on to it.

With clarity and wit, Slingerland introduces us to these thinkers and the marvelous characters in their texts, from the butcher whose blade glides effortlessly through an ox to the wood carver who sees his sculpture simply emerge from a solid block. Slingerland uncovers a direct line from wu-wei to the Force in Star Wars, explains why wu-wei is more powerful than flow, and tells us what it all means for getting a date. He also shows how new research reveals what’s happening in the brain when we’re in a state of wu-wei—why it makes us happy and effective and trustworthy, and how it might have even made civilization possible.

Through stories of mythical creatures and drunken cart riders, jazz musicians and Japanese motorcycle gangs, Slingerland effortlessly blends Eastern thought and cutting-edge science to show us how we can live more fulfilling lives. Trying Not To Try is mind-expanding and deeply pleasurable, the perfect antidote to our striving modern culture.

Edward Slingerland is Professor of Asian Studies and Canada Research Chair in Chinese Thought and Embodied Cognition at the University of British Columbia. Educated at Princeton, Stanford and the University of California, Berkeley, he is an internationally renowned expert in Chinese thought, comparative religion, and cognitive science. In addition to over twenty academic journal articles in a range of fields, he has written several scholarly books, including What Science Offers the Humanities and a translation of the Analects of Confucius.  He lives in Vancouver with his wife and daughter.

Praise for Trying Not to Try:

A Guardian Best Book of 2014
A 2014 Brain Pickings Best Book on Psychology, Philosophy, and How to Live Meaningfully

"Looks like a self-help book, but it’s actually an insightful and lucid introduction to some of the most fruitful ideas in ancient Chinese philosophy."
—Julian Baggini, The Guardian

"Edward Slingerland treats us to a work of seminal importance. Yet never was there such an important book that takes itself so lightly. Slingerland explains the correspondence between ancient Chinese philosophical ideas about wu-wei, or doing by not doing, and modern neuroscience. In doing so in erudite fashion, he also manages to discuss Woody Allen, magic mushrooms, his daughter's storybooks, Luke Skywalker and how hard it is to get a date when you're desperate."
—Huffington Post

"Trying not to Try is an enlightening introduction to the often misunderstood mindset of wu-wei, the 'being in the moment' that is the key to Eastern wisdom. Slingerland's volume is an invaluable guide to anyone on the quest for a full life, lived spontaneously."
—Mihaly Csikszentmihalyi, author of Flow

"Ancient Chinese philosophy has never been more accessible. Not even in ancient China. Slingerland is not just a philosopher, he's a time traveller."
—Russell Brand, author of Revolution

"Trying Not to Try navigates the confluence of two mighty rivers: the burgeoning science of the mind and the classic wisdom of China’s Taoist and Confucian traditions. This is a thoughtful, grounded book about traditions that should be better known—and more often put into practice—in the West."
—Daniel H. Pink, author of Drive and To Sell is Human

"East meets West in Edward Slingerland's Trying Not to Try, an entertaining and thought-provoking account of how the principles of ancient Chinese thought continue to apply—indeed, may apply even more—in modern times. Slingerland will make you reconsider your approach to everyday life and will challenge you to approach success—and failure—in a new, refreshing and reenergizing light."
—Maria Konnikova, author of Mastermind

"‘I'll give it a try,’ says Luke Skywalker, and Yoda snaps: ‘Try not. Do. Or do not. There is no try.’ In this fascinating book, Edward Slingerland brings together ancient Chinese philosophy and contemporary cognitive science to solve the secret of wu-wei—the art of acting effortlessly and spontaneously, of being active and effective, even brilliant, without ever trying. The book itself is a testament to the power of wu-wei, as Slingerland explores rich and intricate ideas with confidence, clarity, and grace. Trying Not to Try is intellectually stimulating, a pleasure to read, and might well change your life."
—Paul Bloom, Brooks and Suzanne Ragen Professor of Psychology, Yale University; author of Just Babies and How Pleasure Works

"Trying Not to Try is fascinating, original, and mind-expanding — it shows us a completely different way of thinking about success and happiness."
—Amy Chua, John M. Duff, Jr. Professor of Law, Yale Law School; author of Battle Hymn of the Tiger Mother

"Ancient China produced some of the greatest wisdom in human history, and Slingerland makes those riches accessible to modern readers. This book represents the humanities at their best — it's grounded in careful research about an ancient culture, yet speaks to the eternal challenge of being human in a complex and confusing world."
—Jonathan Haidt, Thomas Cooley Professor of Ethical Leadership at New York University's Stern School of Business; author of The Happiness Hypothesis and The Righteous Mind

"A remarkable time-traveling synthesis that shows how classic Chinese philosophers anticipated contemporary brain science and also looked beyond it, offering sage advice about how to live lives that flow.  We meet Confucius, Daoists, the first Zen Master, a 6th century hippie, and other ancient Eastern educators, whose ideas have never been rendered more relevant to our times."
—Jesse Prinz, Distinguished Professor of Philosophy and Director of the Committee for Interdisciplinary Science Studies, City University of New York

"Through a combination of hard science and ancient philosophy, Trying Not to Try has convinced me that my usual approach to life—smashing through walls and grinding out painful victories—isn’t all it’s cracked up to be. Sometimes trying hard is overrated. Slingerland has written a charming, intellectually rigorous book that can help all of us improve our lives."
—Jonathan Gottschall, author of The Storytelling Animal

"A fascinating read. With state-of-the art science and interesting stories, Slingerland provides key insights from the East and West for achieving happiness and well-being."
—Sian Beilock, professor of psychology, University of Chicago; author of Choke

"Edward Slingerland is one of the world’s leading comparative philosophers and the foremost advocate of bridging the gulf between cognitive science and the humanities. In Trying Not to Try he reminds us that philosophy truly is a way of life, that classical Chinese philosophy offers deep insights into human flourishing, and that this classical Chinese wisdom anticipates in compelling ways what the best contemporary cognitive science teaches. This is a landmark book— clear, sparkling, and humane."
—Owen Flanagan, James B. Duke Professor of Philosophy, Duke University; author of The Bodhisattva’s Brain

"This wonderful book not only shows us how to live a more satisfying life, it helps explain why social life is even possible: spontaneity, Slingerland argues, is the key to trust, and ultimately, the evolution of cooperation. A thought-provoking book by a truly gifted writer."
—Harvey Whitehouse, Director of the Institute of Cognitive and Evolutionary Anthropology, University of Oxford

"Slingerland’s book exemplifies the very principles it elucidates. Although the material is sophisticated, we effortlessly glide through a highly original integration of ancient wisdom and modern science towards a deep understanding of how one can simultaneously set a course in life and live spontaneously."
—Jonathan Schooler, Professor of Psychological and Brain Sciences at the University of California Santa Barbara

"In this fascinating book, Edward Slingerland tackles one of the most infuriating obstacles we encounter in our attempts to live meaningful lives. When we try with too much conscious effort to feel happy, or achieve our goals, we sabotage ourselves – but trying to be spontaneous is equally futile. The way out of this paradox is wu-wei, the ancient Chinese ideal of effortless yet accomplished living. Trying Not To Try is both a deeply researched history of this enviable state of relaxed success, and a witty guide to achieving it yourself. Don't overthink whether you're going to read it -- just read it."
—Oliver Burkeman, author of The Antidote: Happiness for People Who Can't Stand Positive Thinking

"I tried hard to avoid reading this book — just too much to do. But I lost control, dipped in, and was swept along by apparently effortless prose describing the contrast between Confucianism and Taoism, and its relevance to our modern lives, including the good evolutionary reasons why commitment is usually more successful than manipulation. This is the perfect book club book."
—Randolph Nesse, Arizona State University Center for Evolution, Medicine, and Public Health, and author of Why We Get Sick

"Slingerland lucidly addresses the power of developing a 'cultured spontaneity' and accessibly explains how the need to shut off our minds and bodies can be challenging in an age when smarter and faster is the status quo…A studious and fluent appeal for the benefits of a sound mind."
—Kirkus Reviews

"Slingerland's book is valuable and refreshing; it illuminates traditions unfairly overlooked in the West, and does so in a way that's clear-eyed, amenable to science, and largely free of the facile relativism that often mars Western accounts of Eastern philosophy."
—The Skinny