Raid on the Sun: Inside Israel's Secret Campaign that Denied Saddam the Bomb (Paperback) 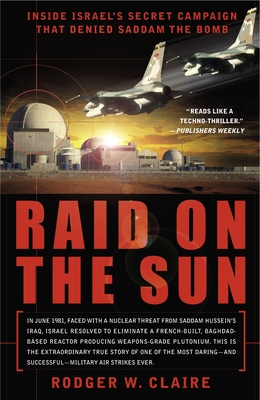 By Rodger Claire
$17.00
Email or call for availability

From the earliest days of his dictatorship, Saddam Hussein had vowed to destroy Israel. So when France sold Iraq a top-of-the-line nuclear reactor in 1975, the Israelis were justifiably concerned—especially when they discovered that Iraqi scientists had already formulated a secret program to extract weapons-grade plutonium from the reactor, a first critical step in creating an atomic bomb. The reactor formed the heart of a huge nuclear plant situated twelve miles from Baghdad, 1,100 kilometers from Tel Aviv. By 1981, the reactor was on the verge of becoming “hot,” and Israeli Prime Minister Menachem Begin knew he would have to confront its deadly potential. He turned to Israeli Air Force commander General David Ivry to secretly plan a daring surgical strike on the reactor—a never-before-contemplated mission that would prove to be one of the most remarkable military operations of all time.

Written with the full and exclusive cooperation of the Israeli Air Force high command, General Ivry (ret.), and all of the eight mission pilots (including Ilan Ramon, who become Israel’s first astronaut and perished tragically in the shuttle Columbia disaster), Raid on the Sun tells the extraordinary story of how Israel plotted the unthinkable: defying its U.S. and European allies to eliminate Iraq’s nuclear threat. In the tradition of Black Hawk Down, journalist Rodger Claire re-creates a gripping tale of personal sacrifice and survival, of young pilots who trained in the United States on the then-new, radically sophisticated F-16 fighter bombers, then faced a nearly insurmountable challenge: how to fly the 1,000-plus-kilometer mission to Baghdad and back on one tank of fuel. He recounts Israeli intelligence’s incredible “black ops” to sabotage construction on the French reactor and eliminate Iraqi nuclear scientists, and he gives the reader a pilot’s-eye view of the action on June 7, 1981, when the planes roared off a runway on the Sinai Peninsula for the first successful destruction of a nuclear reactor in history.

Rodger W. Claire, a former magazine editor, is the first journalist to have been granted complete access to all of the individuals involved in the raid on Osirak and to classified materials detailing it. The author of numerous articles and two screenplays, he lives in Los Angeles.

Advance Praise for Raid on the Sun


“Rodger Claire handles a complex story with ease and assurance. Infused with an understanding of the pilots and their historical mission, RAID ON THE SUN illustrates how what they achieved for Israel was as vital as that earlier flight of the Enola Gay to Hiroshima to end World War Two. Claire has created a patient, scrupulous story that still unfolds with the pace and verve of a thriller.  Don’t wait for the movie of the book.  Buy it now.” —Gordon Thomas, author of Gideon’s Spies: Mossad’s Secret Warriors

“RAID ON THE SUN is an extraordinary look into the most secret, and perhaps the finest, air force on the planet. It is also a blistering indictment of the international arms industry that sell modern weapons to anyone with money. RAID ON THE SUN is required reading for everyone in the age of terror.” —Stephen Coonts, author of Flight of the Intruder

“A stunning eye-opener, shocking you with the realization of the enormous service the Israeli Air Force rendered the free world with its 1981 attack on Saddam Hussein’s nuclear facility. Claire went right to the source—the Israeli pilots who flew the mission—to tell in colorful detail the full story of this historic strike.” —Walter Boyne, author of Operation Iraqi Freedom: What Went Right, What Went Wrong and Why