A Long Strange Trip: The Inside History of the Grateful Dead (Paperback) 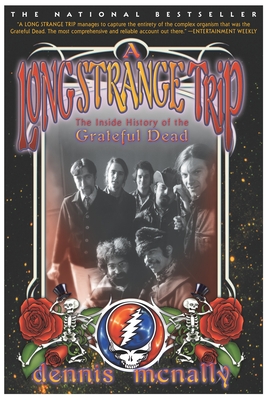 The complete history of one of the most long-lived and legendary bands in rock history, written by its official historian and publicist—a must-have chronicle for all Dead Heads, and for students of rock and the 1960s’ counterculture.

From 1965 to 1995, the Grateful Dead flourished as one of the most beloved, unusual, and accomplished musical entities to ever grace American culture. The creative synchronicity among Jerry Garcia, Bob Weir, Phil Lesh, Bill Kreutzmann, Mickey Hart, and Ron “Pigpen” McKernan exploded out of the artistic ferment of the early sixties’ roots and folk scene, providing the soundtrack for the Dionysian revels of the counterculture. To those in the know, the Dead was an ongoing tour de force: a band whose constant commitment to exploring new realms lay at the center of a thirty-year journey through an ever-shifting array of musical, cultural, and mental landscapes.

Dennis McNally, the band’s historian and publicist for more than twenty years, takes readers back through the Dead’s history in A Long Strange Trip. In a kaleidoscopic narrative, McNally not only chronicles their experiences in a fascinatingly detailed fashion, but veers off into side trips on the band’s intricate stage setup, the magic of the Grateful Dead concert experience, or metaphysical musings excerpted from a conversation among band members. He brings to vivid life the Dead’s early days in late-sixties San Francisco—an era of astounding creativity and change that reverberates to this day. Here we see the group at its most raw and powerful, playing as the house band at Ken Kesey’s acid tests, mingling with such legendary psychonauts as Neal Cassady and Owsley “Bear” Stanley, and performing the alchemical experiments, both live and in the studio, that produced some of their most searing and evocative music. But McNally carries the Dead’s saga through the seventies and into the more recent years of constant touring and incessant musical exploration, which have cemented a unique bond between performers and audience, and created the business enterprise that is much more a family than a corporation.

Written with the same zeal and spirit that the Grateful Dead brought to its music for more than thirty years, the book takes readers on a personal tour through the band’s inner circle, highlighting its frenetic and very human faces. A Long Strange Trip is not only a wide-ranging cultural history, it is a definitive musical biography.

DENNIS MCNALLY graduated from St. Lawrence University in Canton, New York, and received a Ph.D. in American history from the University of Massachusetts. After being selected as the Grateful Dead’s official historian in 1980, he assumed the band’s publicity duties in 1984 and has been running that post ever since. He is the author of one previous book, Desolate Angel: Jack Kerouac, the Beat Generation, and America. He lives with his wife in San Francisco.

“If you want to know what happened, why it happened, how it happened, and what it was like in the Grateful Dead, A Long Strange Trip is for you. No other book on us comes close to it.” —Bob Weir

“McNally has presented an evenhanded treatment of what is arguably the most complex and multifaceted phenomenon in the history of American music. I highly recommend it to anyone who really wants to know what we are all about.” —Owsley “Bear” Stanley

“It’s a simple tale, really. A band of misfit guys fall in love, stumble blindly onward and defy gravity, then try to kiss the face of God! This truth is better than fiction. I hope you all enjoy this odyssey as much as I have.” —Mickey Hart

“Dennis McNally knows the Grateful Dead as intimately as they know themselves. His historian’s eye, his immersion as a Dead ‘family member,’ and his crazed hippie heart have made this the book to read about the life, times, and twisted, double-helix road of the band’s evolution. It’s a great read.” —Peter Coyote

“As I read Dennis’s book, I knew he is the one person who could tell the history of the Dead, and why this band survived as it attracted everyone from the so-called hippie generation to those of us firmly in the establishment. It is a well-written and valuable history.” —Senator Patrick J. Leahy

“No novelist, sane or otherwise, could have invented the ethereal saga of the Grateful Dead. Dennis McNally’s backstage portrait of the world’s most liberated rock band is full of unforgettable images, wild and funny and fascinating.” —Carl Hiaasen

“The Dead has been an inspiring source of light for countless people. Dennis McNally’s riveting tale of the longest strangest trip will take you on a high-altitude training course and leave you prepared for the next lightning bolt of social and spiritual revelation.” —Bill Walton

“This is McNally’s view of what went down. It’s more often right than wrong and done with love, not a grudge, which goes a long way toward excusing another damned book about the Grateful Dead. Any view of us is necessarily a limited interpretation, like an aerial photo of Ground Zero. What Dennis loves and hates about us bears more weight than most interpretations because he took twenty years to get his facts straight. I’ll miss him when we kill him.” —Robert Hunter