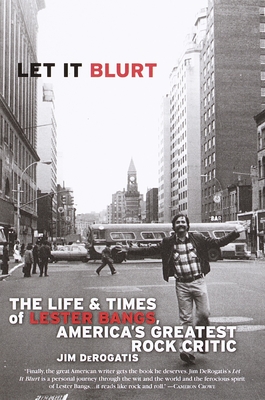 By Jim DeRogatis
Unavailable, our apologies.
Sorry, We Can Not Obtain this Book at This Time

Let It Blurt is the raucous and righteous biography of Lester Bangs (1949-82)--the gonzo journalist, gutter poet, and romantic visionary of rock criticism. No writer on rock 'n' roll ever lived harder or wrote better--more passionately, more compellingly, more penetratingly. He lived the rock 'n' roll lifestyle, guzzling booze and Romilar like water, matching its energy in prose that erupted from the pages of Rolling Stone, Creem, and The Village Voice. Bangs agitated in the seventies for sounds that were harsher, louder, more electric, and more alive, in the course of which he charted and defined the aesthetics of heavy metal and punk. He was treated as a peer by such brash visionaries as Lou Reed, Patti Smith, Richard Hell, Captain Beefheart, The Clash, Debbie Harry, and other luminaries.

Let It Blurt is a scrupulously researched account of Lester Bangs's fascinating (if often tawdry and unappetizing) life story, as well as a window on rock criticism and rock culture in their most turbulent and creative years. It includes a never-before-published piece by Bangs, the hilarious "How to Be a Rock Critic," in which he reveals the secrets of his dubious, freeloading trade.

Jim DeRogatis is the pop music critic at the Chicago Sun-Times. Together with Greg Kot, rock critic at the Chicago Tribune and author of Wilco: Learning How to Die, he is the host of Sound Opinions, “the world's only rock and roll talkshow,” which is now broadcast on Public Radio. He is the author of Let It Blurt: The Life and Times of Lester Bangs, America’s Greatest Rock Critic (Broadway Books, 2000), among other books.

"Finally, the great American writer gets the book he deserves. Jim DeRogatis's Let It Blurt is a personal journey through the wit and the world and the ferocious spirit of Lester Bangs...it reads like rock and roll."
--Cameron Crowe

"Let It Blurt tells one of the essential rock and roll stories with great affection and panache. Lester Bangs--paradigm, mystery, great writer, tragicomic presence--has been given the biography he deserves...A splendid book."
--Jonathan Lethem, author of Motherless Brooklyn

"Lester Bangs lived fast, died young, and left a beautiful body of work. Jim DeRogatis, himself a gifted writer on rock and roll, knows both of Bangs's worlds--the music and the journalism--and has written an elegy for one of the few critics whose work is worth reading for itself, apart from its subjects."
--Roger Ebert

"To those who knew him, Lester Bangs was a force of nature, 'larger than life' and all such biz. For a mere book to capture the full sweep of his mind/body at speed and at rest may be too tall an order, but Let It Blurt is a welcome stab indeed at the whole Lester thing."
--Richard Meltzer