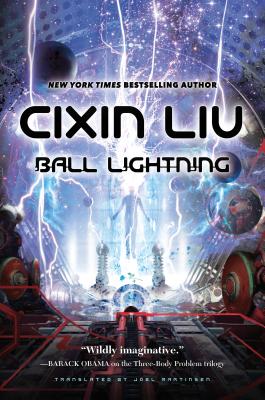 From the New York Times bestselling author of the Three-Body Trilogy, Cixin Liu's Ball Lightning is the story of what happens when the beauty of scientific inquiry runs up against the drive to harness new discoveries with no consideration of their possible consequences.

When Chen’s parents are incinerated before his eyes by a blast of ball lightning, he devotes his life to cracking the secret of this mysterious natural phenomenon. His search takes him to stormy mountaintops, an experimental military weapons lab, and an old Soviet science station.

The more he learns, the more he comes to realize that ball lightning is just the tip of an entirely new frontier. While Chen’s quest for answers gives purpose to his lonely life, it also pits him against soldiers and scientists with motives of their own: a beautiful army major with an obsession with dangerous weaponry, and a physicist who has no place for ethical considerations in his single-minded pursuit of knowledge.

Joel Martinsen is research director for a media intelligence company. His translations have appeared in Words Without Borders, Chutzpah!, and Pathlight. He lives in Beijing.

“Extraordinary.” —The New Yorker, on The Three Body Problem

“Remarkable, revelatory and not to be missed.” —Kirkus Reviews, starred review, on The Three Body Problem

"A must-read in any language.” —Booklist, on The Three Body Problem

"A meditation on technology, progress, morality, extinction, and knowledge that doubles as a cosmos-in-the-balance thriller.... a testament to just how far [Liu's] own towering imagination has taken him: Far beyond the borders of his country, and forever into the canon of science fiction. - NPR, on Death's End

"The best kind of science fiction, familiar but strange all at the same time." -- Kim Stanley Robinson, on The Three Body Problem