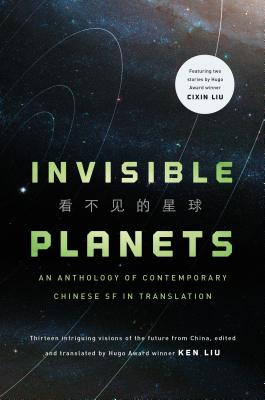 The thirteen stories in this collection, including two by Cixin Liu and the Hugo and Sturgeon award-nominated â€œFolding Beijingâ€ by Hao Jingfang, add up to a strong and diverse representation of Chinese SF. Some have won awards, some have garnered serioius critical acclaim, some have been selected for Yearâ€™s Best anthologies, and some are simply Ken Liuâ€™s personal favorites.

To round out the collection, there are several essays from Chinese scholars and authors, plus an illuminating introduction by Ken Liu. Anyone with an interest in international science fiction will find Invisible Planets an indispensable addition to their collection.

For more Chinese SF in translation, check out Broken Stars.

Ken Liu is an award-winning author of speculative fiction. His books include the Dandelion Dynasty series (The Grace of Kings), The Paper Menagerie and Other Stories, The Hidden Girl and Other Stories, and the Star Wars tie-in novel, The Legends of Luke Skywalker. He frequently speaks at conferences and universities on topics like futurism, cryptocurrency, the mathematics of origami, and more. He lives near Boston with his family.

"These stories, along with the rest of the anthology, represent the best in both science fiction and works in translation, detailing situations that appear alien on the surface but deftly reframe contemporary issues to give readers a new view of familiar human experiences.A phenomenal anthology of short speculative fiction." â€”Kirkus Reviews, starred review

"Greatly varied in theme and approach, all of these stories impress with their visionary sweep and scope...superb compilation." â€”Publishers Weekly, starred review

"With stories ranging over social control, world-building rats and redundant robots who have outlived the humans who made them, this is a collection that will stimulate and delight" â€”Daily Mail


'A wonderful collection, it's thoughtful and entertaining fiction that as a western reader opens your eyes to science fiction written by a different, rich culture. My favourite short story collection of the year" â€”SF Book Reviews