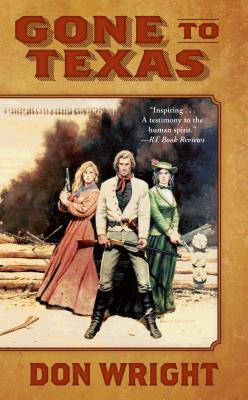 By Don Wright
$8.99
This book is out of stock indefinitely, unable to order at this time.

DON WRIGHT's Gone to Texas is the saga of Peyton Lewis and Fletcher Rucker, two rebel boys whose innocence was destroyed in the bloody wreckage that was the Civil War. Young, desperate men, they fall in with a scheme to rob a bank but are unprepared for the violence that ensues. Sickened by the ravages of war and the wanton cruelty that is the legacy of this bloody conflict, they take their cut and join those who look to the wilderness of the Texas frontier for a fresh start. Along the way they will meet rogues, killers, and two exceptional women, and together they will weather the travails of the new frontier and carve out a new life.

Don Wright was born in Louisville, Kentucky in 1939, but he has lived in Tennessee most of his life. Don and his wife, Patricia, live in a historical home in Sumner County called "Walnut Grove." They have a daughter, Candace, and a grandson, Jamie, and a great grandson.Don has had a variety of careers. Wright served in the army as a military policeman from 1962 to 1964. He won the marksmanship award in his company. He is noted for making authentic powder horns which he has sold to a select clientele. On November 29, 2008, his work was honored at the Owensboro Kentucky Museum of Art. He usually describes himself as a pipefitter, even after writing his bestselling novel (16 weeks on the best seller list), The Woodsman. He has written 4 books, The Captive, The Last Plantation and Gone to Texas. Don was recognized as the best writer of the year for his novel, The Woodsman. He has recently submitted his latest novel for publication. Between books, Don ventured into politics, serving four years as a Tennessee state senator and nine years as mayor of Gallatin, Tennessee

"His characters are right out of Hollywood casting, while his plot inescapably calls to mind films such as John Wayne’s Stagecoach and Clint Eastwood’s The Outlaw Josey Wales…."
—Publishers Weekly

"Don Wright has the knack for writing stories based on real people that present a gritty, accurate and inspiring portrait of those who endure and triumph—a testimony to the human spirit."
—RT Book Reviews